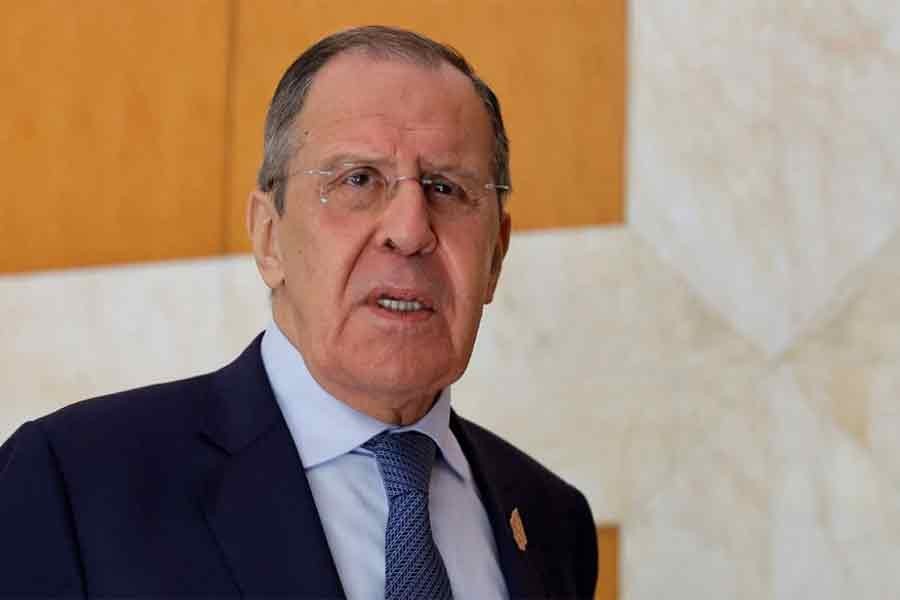 His comments, the clearest acknowledgement yet that Russia's war goals have expanded over the five months of the war, came after Washington said it saw signs Moscow was preparing to formally annexe territory it has seized in its neighbour.

European Commission President Ursula von der Leyen meanwhile accused Russia of "blackmailing" the European Union over energy, as she unveiled a plan to slash gas demand in the bloc ahead of a feared cut-off of deliveries by Russia as winter approaches.

Russian President Vladimir Putin had earlier warned that gas supplies sent to Europe via the huge Nord Stream 1 pipeline, which has been closed for 10 days for maintenance, were at risk of being reduced further.

Lavrov is the most senior figure to speak openly of Russia's war goals in territorial terms, nearly five months after Putin launched his Feb. 24 invasion with a denial that Russia intended to occupy its neighbour.

Then, Putin said his aim was to demilitarise and "denazify" Ukraine - a statement dismissed by Kyiv and the West as a pretext for an imperial-style war of expansion.

Lavrov told RIA Novosti that geographical realities had changed since Russian and Ukrainian negotiators held peace talks in Turkey in late March that failed to produce any breakthrough.

At that time, he said, the focus was on the Donetsk and Luhansk People's Republics (DPR and LPR), self-styled Russian-backed breakaway entities in eastern Ukraine from which Moscow has said it aims to drive out Ukrainian government forces.

"Now the geography is different, it's far from being just the DPR and LPR, it's also Kherson and Zaporizhzhia regions and a number of other territories," he said, referring to territories well beyond the Donbas that Russian forces have wholly or partly seized.

"This process is continuing logically and persistently," Lavrov said, adding that Russia might need to push even deeper.

After being beaten back in an initial attempt to take the Ukrainian capital Kyiv, Russia's defence ministry said on March 25 that the first phase of its "special military operation" was complete and it would now focus on "achieving the main goal, the liberation of Donbas".

Nearly four months later, it has taken Luhansk, one of two regions that make up the Donbas, but remains far from capturing all of the other, Donetsk. In the past few weeks, it has ramped up missile strikes on cities across Ukraine.

On Wednesday, the Ukrainian military and politicians reported heavy and sometimes fatal Russian shelling amid what they said were largely unsuccessful attempts by Russian ground forces to advance.

Citing U.S. intelligence, White House national security spokesman John Kirby had earlier accused Russia of laying the groundwork to annex Ukrainian territory it has seized since the start of the war, an assertion the Russian embassy in Washington said mischaracterised what Moscow was trying to do.

Russia's invasion has killed thousands, displaced millions and flattened cities, particularly in Russian-speaking areas in the east and southeast of Ukraine. It has also raised global energy and food prices and raised fears of famine in poorer countries as Ukraine and Russia are both major grain producers.

There have been more than 9.5 million border crossings from Ukraine since Feb. 24, the UN Refugee Agency reported on Wednesday.

With uncertainty swirling over the planned restart on Thursday of Nord Stream 1, the European Union proposed its 27 member countries cut gas demand by 15 per cent from now until spring.

Warning that without deep cuts members could struggle for fuel during winter if Russia cuts off supply in retaliation for the bloc's support of Ukraine, the executive Commission said that the target could be made binding in an emergency.

"Russia is blackmailing us. Russia is using energy as a weapon," Commission President Ursula von der Leyen said, describing a full cut-off of Russian gas flows as "a likely scenario" for which "Europe needs to be ready".

Sources have told Reuters that Nord Stream 1, the single largest link for Russian gas supplies to Europe, is expected to restart as scheduled on Thursday after 10 days of annual maintenance work, but at reduced capacity.

Speaking after a visit to Tehran, Putin said the capacity of Nord Stream 1 could be reduced due to problems with other pumping units, one of which would need to be sent for maintenance on July 26.

He said Russian energy giant Gazprom was ready to fulfil its obligations on gas exports.

Gazprom cut exports through the route to 40 per cent capacity last month, citing delays in the return of a turbine Siemens Energy was servicing in Canada, which had initially banned the equipment's return, citing sanctions.

Putin said on Wednesday it was not clear in what condition the turbine would be returned after repairs in Canada and that there was a risk that the equipment could be switched off halting the flow of gas through Nord Stream.

Russia, the world's largest gas exporter and second-largest crude oil supplier has denied Western accusations of using its energy supplies as a tool of coercion, saying it has been a reliable energy supplier.

Ukraine's western creditor governments meanwhile urged bondholders to accept Kyiv's request for a two-year delay on its debt payments and said they would suspend payments owed to them.