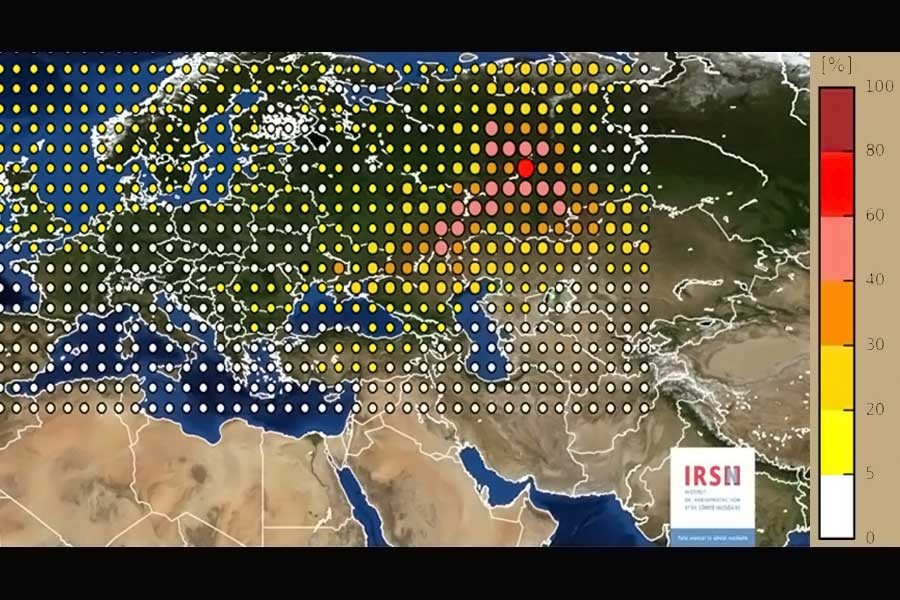 A map provided by the French Institute for Radiation Protection and Nuclear Safety showed levels of ruthenium 106 across Europe. (Credit: INRS, via Associated Press)

Russian authorities have confirmed reports of a spike in radioactivity in the air over the Ural Mountains while the suspected culprit, a nuclear fuel processing plant, denied it was the source of contamination.

The Russian Meteorological Service said in a statement Tuesday that it recorded the release of Ruthenium-106 in the southern Urals in late September and classified it as "extremely high contamination." Russian authorities insisted, however, that the amount of Ruthenium posed no health risks.

France's nuclear safety agency earlier this month said that it recorded radioactivity in the area between the Volga River and the Ural Mountains from a suspected accident involving nuclear fuel or the production of radioactive material. It said the release of the isotope Ruthenium-106 posed no health or environmental risks to European countries.

Last month, when reports of a trace of Ruthenium over Europe first appeared, Russia's state-controlled Rosatom corporation denied any leak. Rosatom reaffirmed Tuesday that the Ruthenium emission registered by the state meteorological service hadn't come from any of its facilities.

Rosatom said it's committed to the highest standards of transparency and is working closely with international organizations to identify the potential source of the emission, the Associated Press reported.

The Russian meteorological office's report, however, noted high levels of radiation in residential areas adjacent to Rosatom's Mayak plant for spent nuclear fuel. Air samples in the town of Argayash in late September-early October, for example, showed levels nearly 1,000 times higher than those recorded in the previous months.

The Russian Natural Resources Ministry which oversees the meteorological office in a statement later on Tuesday sought to reassure the public, claiming that the radiation levels there still were lower than those deemed to be dangerous.

Mayak in a statement on Tuesday denied being the source of contamination. The plant said it has not conducted any work on extracting Ruthenium-106 from spent nuclear fuel "for many years."

The Nuclear Safety Institute at the Russian Academy of Sciences, which oversees safety standards for the country's nuclear industry, has insisted that Mayak's nuclear waste processing system presents no danger to the surrounding population.

Environmental pressure group Greenpeace said in a statement that it would petition the Russian Prosecutor General's office to investigate "a possible concealment of a radiation accident" and check whether public health was sufficiently protected.