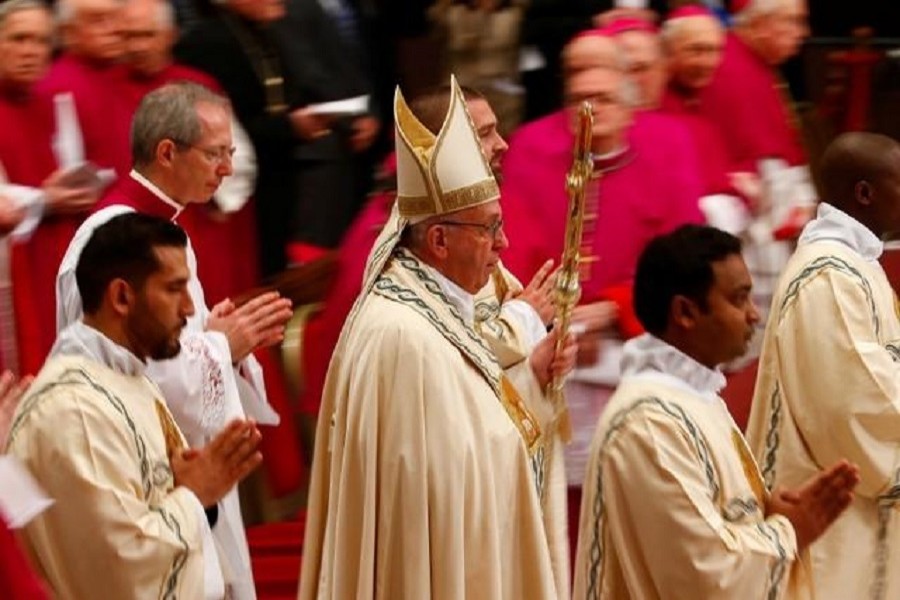 Pope Francis in his year-end message said that 2017 had been marred by war, lies and injustice, and he urged people to take responsibility for their actions.

At his last public event of the year, an evening vespers service in St. Peter’s Basilica, the pontiff said that humanity had “wasted and wounded” the year “in many ways with works of death, with lies and injustices”.

While war was the most obvious sign of “unrepentant and absurd pride”, many other transgressions had caused “human, social and environmental degradation”.

“We must take responsibility for everything before God, our brothers and our creation,” he said.

While the pope did not mention any specific events from 2017, he had made his voice heard on many of the world’s biggest issues over the course of the year.

In April, Francis condemned the “unacceptable massacre” of innocent civilians in a chemical weapons attack in Syria.

Just a month ago, he visited Myanmar, where more than 600,000 Muslim Rohingya people have been forced from their homes and into neighboring Bangladesh, speaking with authorities in an attempt to mitigate the crisis.

The pope also sought to encourage peace in Colombia during a trip in September and lobbied US President Donald Trump to address climate change issues in May. Amid heightening tensions between North Korea and the West, Francis expressed concern about nuclear arsenals.

At the end of the service, Francis walked across St. Peter’s Square, stopping to shake hands and pose for pictures, as he paid a brief visit to the life-size nativity set up outside.

On January 1, the leader of the world’s 1.2 billion Catholics will say a Mass to mark the Church’s World Day of Peace.