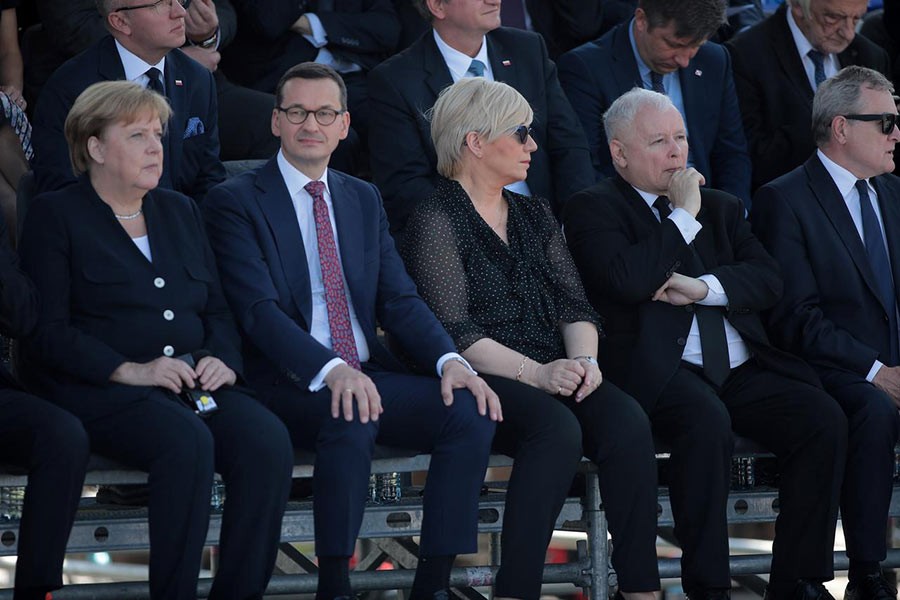 German Chancellor Angela Merkel and US Vice President Mike Pence joined local leaders on Sunday to commemorate 80 years since the start of World War Two in Poland, where the conflict is still a live political issue.

Few places saw death and destruction on the scale of Poland. It lost about a fifth of its population, including the vast majority of its 3 million Jewish citizens.

After the war, its shattered capital of Warsaw had to rise again from ruins and Poland remained under Soviet domination until 1989.

Ceremonies began at 4:30 a.m. (0230 GMT) in the small town of Wielun, site of one of the first bombings of the war on Sept. 1, 1939, with speeches by Polish President Andrzej Duda and his German counterpart, Frank-Walter Steinmeier.

Parallel events, attended by Prime Minister Mateusz Morawiecki and European Commission deputy chief Frans Timmermans, were held in the coastal city of Gdansk, site of one of the first battles of the war.

Morawiecki spoke of the huge material, spiritual, economic and financial losses Poland suffered in the war.

“We need to talk about those losses, we need to remember, we need to demand truth and demand compensation,” Morawiecki said.

For Poland’s ruling Law and Justice (PiS) party, the memory of the war is a major plank of its “historical politics”, aiming to counteract what it calls the West’s lack of appreciation for Polish suffering and bravery under Nazi occupation.

PiS politicians have also repeatedly called for war reparations from Germany, one of Poland’s biggest trade partners and a fellow member of the European Union and NATO. Berlin says all financial claims linked to World War Two have been settled.

Critics say the party’s ambition is to fan nationalism among voters at a time when populists around the world are tapping into historical revisionism. PiS says the country’s standing on the global stage and national security are at stake.

Articles paid for by a foundation funded by state companies, showing Poland’s experience in the war, appeared in major newspapers across Europe and the United States over the weekend.

The Polish National Foundation also paid for supplements in some papers consisting of a copy of their front pages from Sept. 2, 1939, that highlighted the German army’s attack on Poland.

Wartime remembrance has become a campaign theme ahead of a national election due on Oct. 13, with PiS accusing the opposition of failing to protect Poland’s image.

“Often, we are faced with substantial ignorance when it comes to historical policy ... or simply ill will,” Jaroslaw Sellin, deputy culture minister, told Reuters.

Merkel and Pence, who arrived on Sunday after President Donald Trump abruptly canceled a planned trip due to a hurricane, called it an honor to participate in events later in the day in Warsaw.

“We look forward to celebrating the extraordinary character and courage and resilience and dedication to freedom of the Polish people and it will be my great honor to be able to speak to them,” Pence said.

The cancellation of Trump’s visit is a disappointment to the PiS government, which is seen as one of Washington’s closest allies in Europe. Polish and US officials have said another visit could be scheduled in the near future.

For PiS, a high-profile visit by Trump would serve as a counterargument to critics who say the country is increasingly isolated under its rule because of accusations by Western EU members that it is breaching democratic norms.

Opinion polls show PiS party is likely to win the October ballot. The party’s ambition is to galvanize voters and disprove critics by winning a majority that would allow it to change the constitution.

PiS party agrees with the Trump administration on a range of issues including migration, energy and abortion.