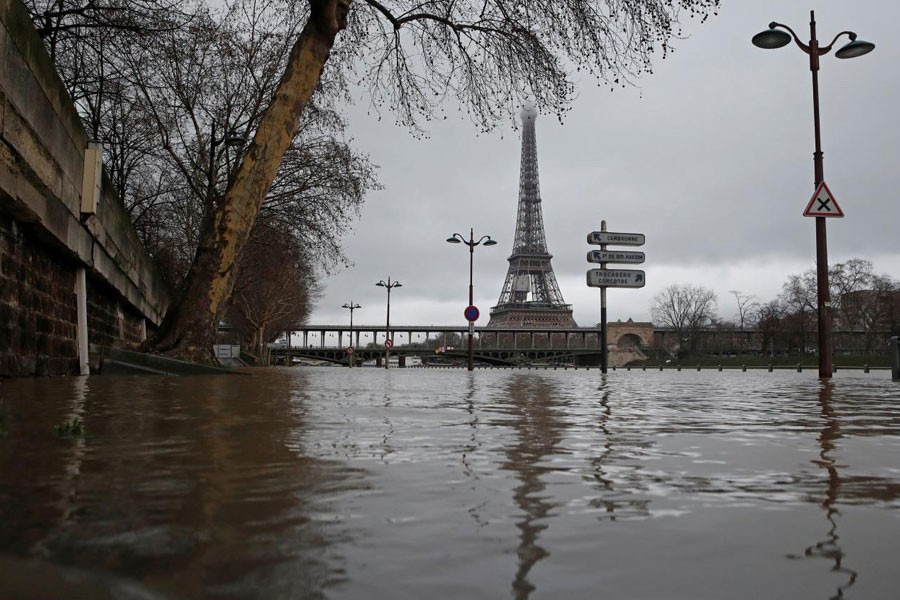 View of the flooded banks of the River Seine near the Eiffel tower in Paris, France, after days of almost non-stop rain caused flooding in the country, January 23, 2018. (REUTERS)

Riverside homes and businesses in France’s capital Paris are on high alert as the swollen River Seine threatens to overflow its banks.

Some basements in the city have already sprung leaks after the river surged following heavy rainfall, reports said.

The Seine is forecast to swell even further this weekend, adding several metres of water above its normal level, reports the BBC.

Many roads in the region are already waterlogged. Boat traffic - including the capital's famous tourist cruises - has also been interrupted.

The water level in the river is expected to peak at around 6m (19ft 6in), which is at least 4m above its normal level.

The statue of a Crimean soldier - known as the Zouave - on the Pont de l'Alma has long been used as a marker for water levels in the city.

On Friday, the water was at its mid-thigh - not as high as the 1910 floods, which reached his neck and submerged the city for two months.

A busy commuter train service, the RER C, has been suspended until next week.

Meanwhile, the Louvre museum has closed a lower level housing the Islamic Arts.

In the suburb of Villeneuve-Saint-Georges, flooding forced some residents into boats to move along the roads.

The flooding is also forcing movement of another city resident - the rat population.

Rodents are being flushed out of the Parisian sewers, media outlet France 24 reports - making the city's rat infestation much more visible than usual.

The recent December-January period is now the third-wettest on record, according to France's national weather service.

Mayor of Paris Anne Hidalgo said the city was coping - but said that the flooding, coupled with recent summer heat-waves, was "clearly a question of the town adapting to climate change".

She also warned that the high water levels would remain into next week, as water levels "subside slowly" due to waterlogged soil in the region.