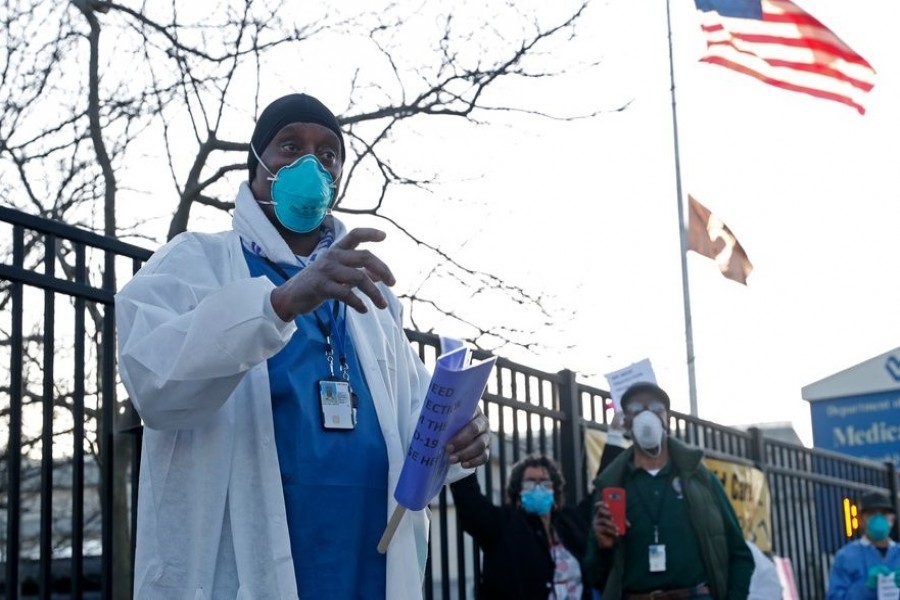 The US state of New York, the epicentre of the country's Covid-19 outbreak, will allow pharmacies to carry out tests for the virus, the governor says.

Andrew Cuomo said some 5,000 pharmacies would be able to carry out testing, with the aim to provide 40,000 per day, reports BBC.

Meanwhile, President Donald Trump did not hold his daily briefing, saying it was not worth his "time or effort".

What did Trump say?

Speaking on Twitter on Saturday, he blamed the media for asking "nothing but hostile questions". He was heavily criticised after suggesting at Thursday's White House news conference that disinfectant could potentially be used as a treatment for the virus.

His remarks have been condemned as dangerous by doctors and manufacturers, as disinfectants are hazardous substances and can be poisonous if ingested.

In New York City, calls to the hotline for exposure to certain household chemicals more than doubled in the 18 hours after Mr Trump's remarks - 30 cases compared to 13 for the same time frame last year.

The briefings with Mr Trump and the coronavirus task force could run for more than two hours. But Thursday's performance caused embarrassment even among some of his supporters, BBC North America correspondent Peter Bowes says.

Mr Trump's tweet appears to confirm reports that the conferences may be coming to an end because polls suggest they have not bolstered the president's popularity among voters, our correspondent adds.

On Friday, the president's briefing was unusually short - lasting just over 20 minutes - and he took no questions from the media.

What measures is New York introducing?

Governor Cuomo announced on Saturday that antibody screenings would be expanded at four hospitals, beginning with frontline medical workers.

He also said independent pharmacies would be allowed to collect samples for diagnostic tests.

It is part of a drive to find out how widely the virus has spread across the state of 20 million people.

"Twenty-one days of hell, and now we are back to where we were 21 days ago," he said. "Testing is what we are compulsively or obsessively focused on now."

Healthcare staff and essential workers - such as police officers, firefighters, bus drivers and shop assistants - would be able to get tests even if they did not have any symptoms of infection, he said.

This was important not just for their own safety but also to protect the public, he said.

"Since we now have more collection sites, more testing capacity, we can open up the eligibility for those tests," Mr Cuomo added.

Hospital admissions in the state have also begun to fall, Mr Cuomo said, in what he described as a sign the crisis was starting to subside. However, the number of deaths announced on Friday increased slightly to 437 - the first time it had risen in four days.

Earlier this week Mr Cuomo said nearly 14% of 3,000 people in a study had tested positive for the presence of antibodies, suggesting the virus had spread widely throughout the population.

Meanwhile New York City's Independent Budget Office said the lockdown would result in the loss of 475,000 jobs and leave the city with a budget deficit of nearly $10bn (£8.1bn).