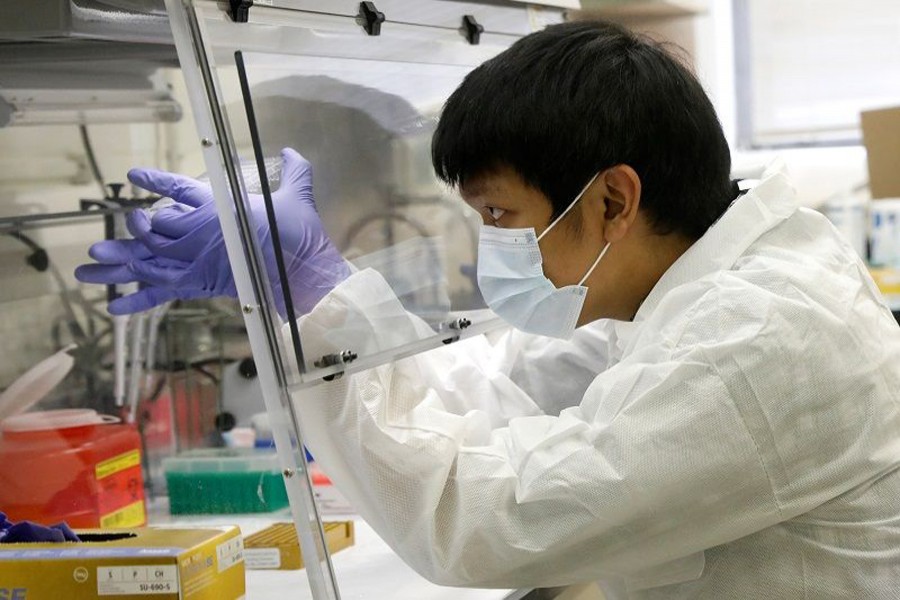 A scientist works in a lab testing COVID-19 samples at New York City’s health department, during the outbreak of the coronavirus disease (COVID-19) in New York City, New York US on April 23, 2020 — Reuters photo

Scientists at New York City’s health department have begun to analyse the novel coronavirus’s genetic material to allow them to trace the origins of any future outbreaks in the coming months as they cautiously look to reopen the largely shuttered city.

Their work joins similar efforts at scores of institutions around the world, which have been sequencing the genomes of virus samples and pooling their findings in an online global database, allowing researchers to observe subtle differences between samples to track the outbreak’s spread.

Dr Oxiris Barbot, the city’s health commissioner, told Reuters this week during a tour of the Public Health Laboratory in Manhattan that genome sequencing could help blunt any second wave of infections later in the year.

“We can use that fingerprint information to understand if those additional infections are due to infections that were still here in the city or if they’ve been imported from someplace else,” she said in an interview, wearing a floral-patterned cloth mask over her nose and mouth.

On the laboratory’s ninth floor, scientists in blue protective gear and face shields are working on the sequencing in cramped rooms, the doors to which are plastered with hazard warnings and rules on safety precautions.

Colleagues on other floors run diagnostic tests for COVID-19, the potentially lethal respiratory illness caused by the coronavirus, on samples sent over from city hospitals without their own testing facilities.

Showerheads are embedded in the ceilings of the building’s drab corridors, and can be activated with the yank of a cord if a worker fears they have been contaminated by whatever they are studying.

The genome of the novel coronavirus consists of a single, short strand of ribonucleic acid, or RNA, a distinctive sequence of genetic base molecules, sometimes described by letters, that the virus uses to hijack its host’s cellular machinery and make copies of itself.

Only four different kinds of letters make up a string of RNA, referred to by geneticists as c, u, a and g. The novel coronavirus genome is about 30,000 letters long, tiny compared with the 3 billion letters that make up the DNA, or deoxyribonucleic acid, of the human genome.

As the virus replicates itself inside its host, it can make tiny transcription errors, altering its genetic signature. These mutations, which can be passed along in subsequent infections, can be detected in samples taken from patients to create a sort of genetic family tree.

Across First Avenue from the Public Health Laboratory, scientists at New York University’s Grossman School of Medicine who sequenced samples of the virus deduced that the variant of the virus dominating in New York City - the heart of one the deadliest outbreaks in the world - arrived via Europe.

“It’s sort of like doing detective work,” Adriana Heguy, one of the New York University researchers, said in an interview.

She has been sharing her results with colleagues around the world via the Germany-based GISAID database, which was created to track the ebb and flow of influenza viruses. “You can find your chain of transmission by doing this,” she said.

Health officials can use this knowledge to determine which measures are more effective than others and where their points of vulnerability may lie.

While most mutations are trivial and do not affect the virus’s behaviour, Heguy and other researchers are also working to amass enough samples to see if there are any clinical differences seen in different variants of the virus, and their work may help design a vaccine that offers the broadest possible protection.