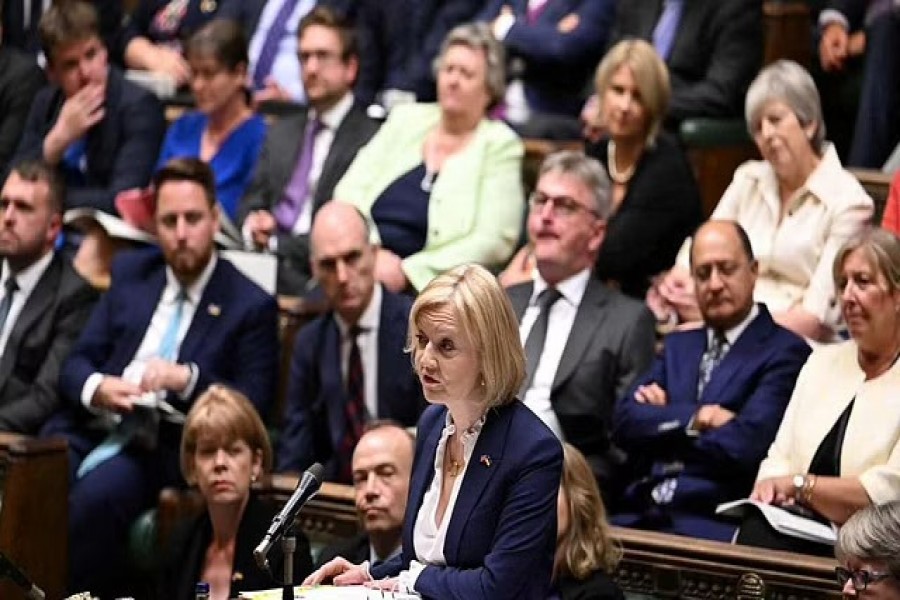 On her first full day as Britain's leader after replacing Boris Johnson, Truss told parliament she would support businesses and households who are bracing for a recession that is forecast to start later this year.

Sterling fell to its lowest level against the US dollar since 1985, in part due to worries among investors about the scale of debt that Britain will have to sell to fund the energy support plan, and the tax cuts that Truss has also promised.

A source familiar with the situation told Reuters that Truss was considering freezing energy bills in a plan that could cost towards 100 billion pounds, a major turnaround from her rejection of "handouts" during the early stages of the Conservative Party leadership campaign.

Deutsche Bank said the energy price support and the promised tax cuts could cost 179 billion pounds, or about half Britain's historic pandemic spending push which dealt a blow to the country's public finances.

Truss ruled out demands by the opposition Labour Party that she fund some of the spending by raising taxes on energy firms.

"I am against a windfall tax. I believe it is the wrong thing to be putting companies off investing in the United Kingdom," Truss told lawmakers.

She is due to give details of the energy support plan in parliament on Thursday.

Her finance minister Kwasi Kwarteng, also on his first full day in the job, said borrowing would be higher in the short term to provide support for households and businesses and fund the tax cuts.

"We need to be decisive and do things differently. That means relentlessly focusing on how we unlock business investment and grow the size of the British economy, rather than how we redistribute what's left," he told business leaders.

The pound sank its lowest level against the dollar since 1985 at $1.1407 and was down almost 1 per cent against the euro too.

While the fall in sterling could add to the inflation pressures in the economy, the expected price freeze plan was likely to help ease the cost-of-living squeeze on consumers which had been shaping up to be the most severe in decades.

BoE Chief Economist Huw Pill said the plan could slow inflation - which surpassed 10% in July - although it was too soon to say what the implications for the central bank's run of interest rate increases would be.

The BoE forecast in August that inflation would exceed 13 per cent, and some economists have said it recently could top 20 per cent if gas prices - pushed up by Russia's invasion of Ukraine - stay high.

Pill also said the BoE would not allow the surge in government spending to fuel demand in the economy to the point where it pushed up inflation.

Nonetheless, investors scaled back their bets on a 75-basis-point rate hike at the BoE's next scheduled monetary policy announcement on Sept. 15 to 60 per cent from almost 80% earlier on Wednesday. Two-year British government bond yields also dropped.

Kwarteng met BoE Governor Andrew Bailey and told him that "independence is really a cornerstone of how we see managing the economy," comments that seemed aimed at reassuring investors that the new government would not pressure the central bank.

Early in the Conservative Party leadership campaign, Truss said the government should set a "clear direction of travel" for monetary policy although she subsequently struck a less interventionist tone.

Kwarteng said he and Bailey would meet regularly, initially twice a week, to coordinate economic support.