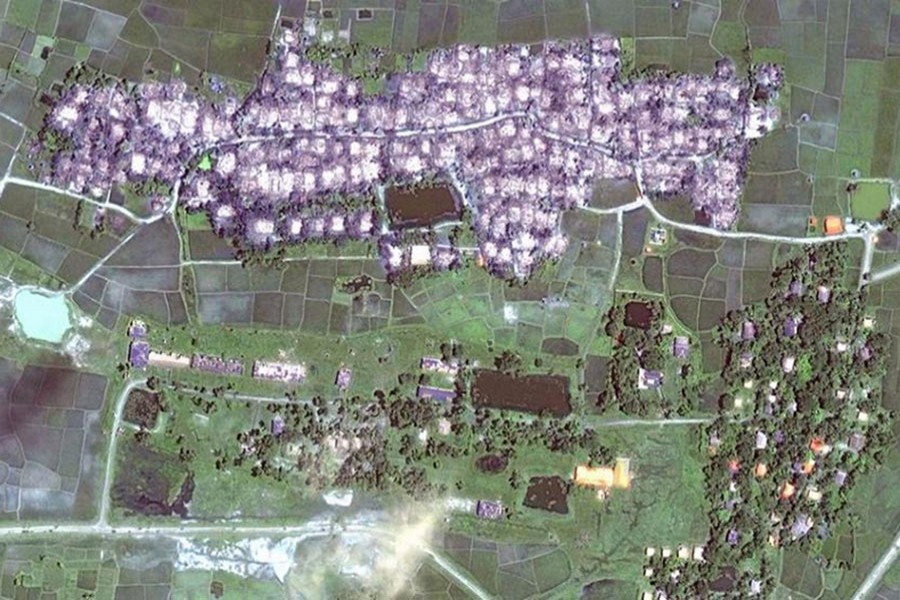 Newly released satellite images revealed that at least 288 villages were destroyed by fire in northern Rakhine State in Myanmar since August 25.

Analysis of the satellite imagery indicated both that the burnings focused on Rohingya villages and took place after Myanmar officials claimed security force "clearance operations" had ceased, said the US-based watchdog on Tuesday, reports UNB.

It also showed that at least 66 villages were burned after September 5, when security force operations supposedly ended, according to a September 18 speech by State Counselor Aung San Suu Kyi.

The Myanmar military responded to attacks on August 25 by the Arakan Rohingya Salvation Army (ARSA) with a campaign of ethnic cleansing, prompting more than 530,000 Rohingya to flee across the border to Bangladesh, according to the United Nations refugee agency.

"These latest satellite images show why over half a million Rohingya fled to Bangladesh in just four weeks," said Phil Robertson, deputy Asia director of HRW.

"The Myanmar military destroyed hundreds of Rohingya villages while committing killings, rapes, and other crimes against humanity that forced Rohingya to flee for their lives."

A total of 866 villages in Maungdaw, Rathedaung, and Buthidaung townships in Rakhine State were monitored and analysed by Human Rights Watch.

The most damage occurred in Maungdaw Township, accounting for approximately 90 per cent of the areas where destruction happened between August 25 and September 25.

Human Rights Watch found that the damage patterns are consistent with fire. Comparing recent imagery with those taken prior to the date of the attacks, analysis showed that most of the damaged villages were 90 to 100 per cent destroyed.

Many villages which had both Rohingya and Rakhine residing in segregated communities, such as Inn Din and Ywet Hnyo Taung, suffered heavy arson damage from arson attacks, with known Rohingya areas burned to the ground while known Rakhine areas were left intact.

The Myanmar government has repeatedly said that ARSA insurgents and local Rohingya communities were responsible for setting the fires that wiped out their villages, but has offered no evidence to support such claims.

Human Rights Watch interviewed in Bangladesh with more than 100 refugees who had fled the three townships gave no indication that any Rohingya villagers or militants were responsible for burning down their own villages.

"The shocking images of destruction in Burma and burgeoning refugee camps in Bangladesh are two sides of the same coin of human misery being inflicted on the Rohingya," said Phil Robertson, Deputy Asia Director.