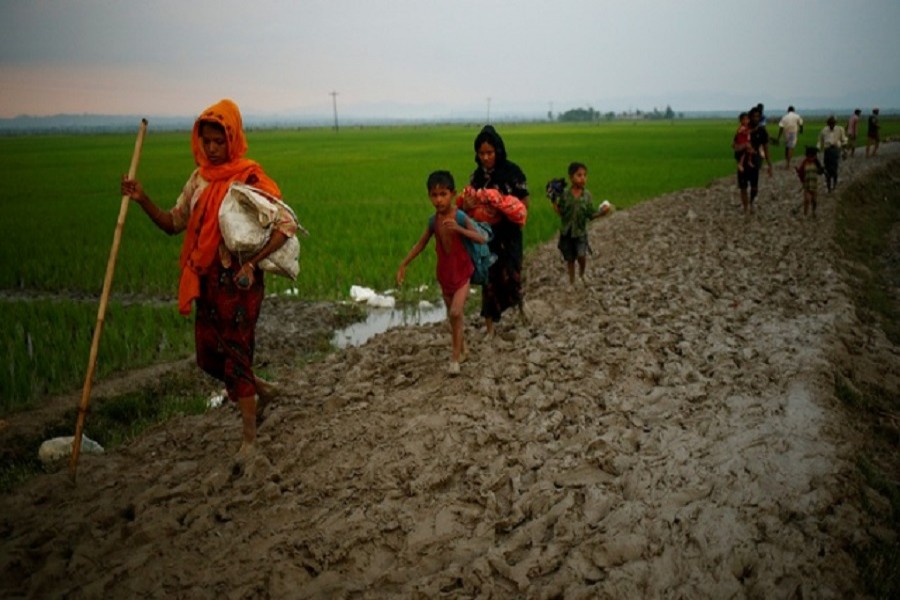 A Rohingya refugee walks on the muddy path after crossing the Bangladesh-Myanmar border in Teknaf. Reuters

Nearly 90,000 Rohingyas have fled to Bangladesh since violence erupted in Myanmar in August, pressuring scarce resources of aid agencies and communities already helping hundreds of thousands of refugees from previous spasms of violence in Myanmar.

The violence in Myanmar was set off by a coordinated attack on Aug 25 on dozens of police posts and an army base by Rohingya insurgents. The ensuing clashes and a major military counter-offensive have killed at least 400 people.

Myanmar officials blamed the Rohingya militants for the burning of homes and civilian deaths but rights monitors and Rohingya fleeing to neighbouring Bangladesh say a campaign of arson and killings by the Myanmar army aims to force them out.

The treatment of Buddhist-majority Myanmar’s roughly 1.1 million Muslim Rohingya is the biggest challenge facing leader Aung San Suu Kyi, accused by Western critics of not speaking out for the minority that has long complained of persecution.

The number of those crossing the border - 87,000 - surpassed the total of Rohingyas who escaped Myanmar after a much smaller insurgent attack in October that set off a military operation beset by accusations of serious human rights abuses.

The newest estimate, based on the calculations of United Nations’ aid workers in the Bangladeshi border district of Cox’s Bazar, takes to nearly 150,000 the total number of Rohingya who have sought refuge in Bangladesh since October.

“We are trying to build houses here, but there isn’t enough space,” said Mohammed Hussein, 25, who is still looking for a place to stay after fleeing Myanmar four days ago.

“No non-government organisations came here. We have no food. Some women gave birth on the roadside. Sick children have no treatment here.”

An unofficial camp for Rohingya refugees that sprang up at Balukhali after the October attacks is being dramatically expanded. Hundreds of Rohingyas milled beside the road while others slung tarpaulins over bamboo frames to make rickety shelters against the monsoon rains.

More than 11,700 “ethnic residents” had been evacuated from northern Rakhine, the government has said, referring to non-Muslims.

The statement did not clarify if financial assistance was offered.

Indonesian Foreign Minister Retno Marsudi will meet Suu Kyi and other officials in Myanmar on Monday, to urge a halt to the violence after a petrol bomb was thrown at the Myanmar embassy in Jakarta over the weekend.

Govt sits on Monday to determine virus impact on economy