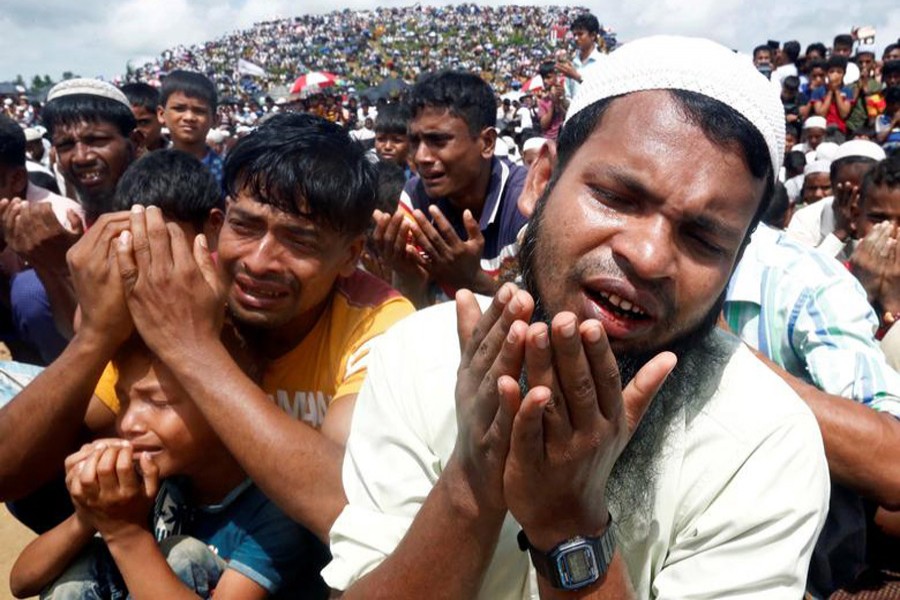 Rohingya refugees pray at a gathering marking the second anniversary of their exodus from Myanmar, at the Kutupalong camp in Cox’s Bazar, Bangladesh, August 25, 2019. Reuters/File Photo

Striking back at an International Criminal Court (ICC) investigation into its alleged crimes against Rohingyas, Myanmar has said it does not accord with the international law, according to global media reports.

"The investigation over Myanmar by the ICC is not in accordance with international law," Zaw Htay, spokesman of the government led by the erstwhile Burmese Peace Prize Laureate Aung San Suu Kyi, said at a press conference on Friday.

Zaw Htay reiterated that that it is Myanmar's own committees who would investigate any abuses and ensure accountability if needs be, meaning that the country would not allow the ICC to launch the investigation on its soil.

The previous day, the Hague-based court cleared the investigation into Myanmar's bloody 2017 military crackdown against the mostly-Muslim group, who have deprived of citizen rights by the court where they have been living for generations.

More than 740,000 Rohingyas have been living in Bangladesh's overcrowded camps fleeing a brutal campaign launched by the military against them in August 2017 in response to attacks by an insurgent group.

According to Qatar's Al Jazeera news channel, United Nations-mandated investigators found that the Myanmar military had carried out mass killings and gang rapes with "genocidal intent", but Myanmar repeatedly defended the crackdown as necessary to stamp out insurgents.

Myanmar has always been declining to recognise the authority of the ICC - a position which they just repeated on Friday striking back against the Haged-based court's Thursday approval of a full probe into the alleged atrocities against the Rohingyas.

Though Myanmar is not an ICC member, the court ruled last year that it has the jurisdiction over the crimes against the Rohingyas since the persecuted are now living as refugees in Bangladesh, which has its membership.

The ICC decision over its investigation into the alleged maltreatment of the Rohingyas by Myanmar came after the West African nation The Gambia on Monday filed a separate case at the UN's top court, the International Court of Justice (ICJ), also based in Hague.