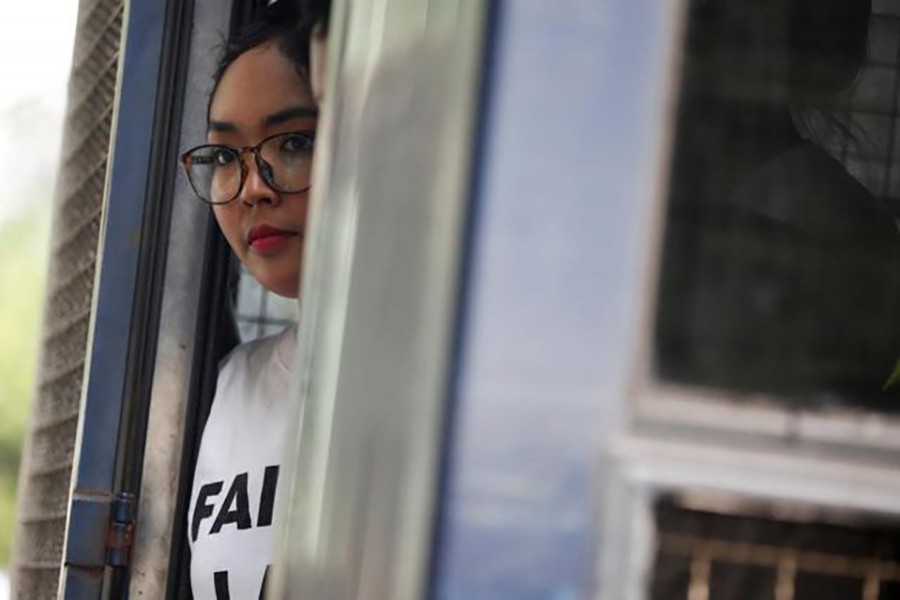 Kay Khaing Tun, a member of the Peacock Generation, a satirical poetry troupe, looks toward the media, inside a police van outside of Botataung court in Yangon, Myanmar on Monday — Reuters photo

A Myanmar judge on Monday extended the sentences of a troupe of satirical performers jailed for mocking the military, in a case that has raised new concern about freedom of expression.

Seven members of the Peacock Generation troupe were arrested in April after taking part in Thangyat, a centuries-old form of poetry and performance that pokes fun at the flaws and foibles of the social and political system.

During live shows and a Facebook broadcast, they criticised the army’s continued role in politics and shared pictures of a dog in a military jacket.

Five members of the troupe were sentenced last month to a year in jail with hard labour for undermining the armed forces.

A court in the commercial capital of Yangon on Monday added another year under the same charge. The performers are being sued in multiple townships.

A sixth performer was sentenced to a year with hard labour, while another was acquitted.

Some of them are facing additional charges under the Telecommunications Act which covers online defamation.

The performers all denied any wrongdoing.

The military ruled with an iron fist for nearly 50 years until a gradual transition to democracy began in 2011 under a constitution drafted with the supervision of the generals, which gives them significant powers over a civilian government.

“These new convictions against the Peacock Generation are signs of a relentless assault on freedom of expression in Myanmar,” Nicholas Bequelin of Amnesty International said in a statement.

“It is ludicrous that these performers have yet to face even more charges and jail terms in the future. The authorities must end this madness and release them all immediately and without conditions.”

Zeyar Lwin, one of the poets, addressed reporters outside the court in a blue prison uniform, his feet shackled.

“The military, which sues and imprisons people, is an institution with no dignity,” he said.

“Such an institution with no dignity is a villain for our country.”