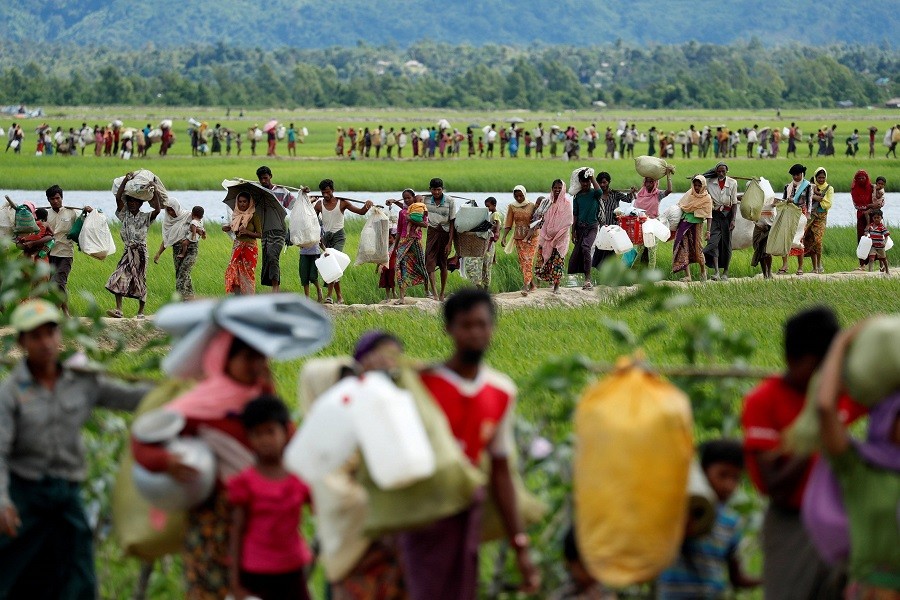 Rohingya refugees walk after they received permission from the Bangladeshi army to continue on to the refugee camps, in Palang Khali, near Cox's Bazar, Bangladesh October 19, 2017. Reuters/File Photo

Myanmar police detained two journalists working for Turkey’s state broadcaster TRT and their interpreter and driver on Friday for flying a drone near the parliament compound, amid tension between the two countries over the Rohingya crisis.

The journalists - Lau Hon Meng from Singapore and Mok Choy Lin from Malaysia - were being questioned at a police station in Myanmar’s capital Naypyitaw after being detained in the morning, a local police officer told Reuters.

About 25 police staged an evening raid on the Yangon house of their Myanmar interpreter, well-known local reporter Aung Naing Soe, seizing his computer memory sticks and searching his documents.

More than 600,000 Rohingya Muslims have fled majority-Buddhist Myanmar for neighbouring Bangladesh since security forces responded to Rohingya militants’ attacks on Aug. 25 by launching a crackdown.

In early September, Turkish President Tayyip Erdogan said the death of the Rohingya in Myanmar constituted a “genocide” aimed at Muslim communities in the region.

Shwe Thaung, an officer from the Naypyitaw police station No.1, where the four were being detained, confirmed the basic facts of the incident but declined to elaborate, including on whether any charges had been filed, citing an ongoing investigation.

“We are still investigating and can’t say more than that,” Shwe Thaung said.

Myanmar state broadcaster MRTV said the journalists did not have permission to film the parliament with a drone. It showed their journalist visas and said the ministry of foreign affairs had informed the Singaporean and Malaysian embassies about the matter.

Turkish state broadcaster TRT could not immediately be reached for comment.

Several journalists in Myanmar have been arrested this year, leading rights groups to warn that the gains made in press freedom since the end of military rule risk being reversed under the rule of national leader Aung San Suu Kyi.

Local journalist Aung Naing Soe has worked with many international media on the country’s transition to democracy after nearly five decades of military dictatorship.

His mother Thandar told Reuters police searched the house for computers and papers and asked for identification documents, and took Aung Naing Soe’s memory sticks. The police also tried but failed to open his computer, she said.

“I asked them to show me the search warrant. But the police said they didn’t need to do that because they were not searching for drugs,” Thandar said.

An administrator from Yangon’s Mingalar Taung Nyunt district, Ye Win Tun, who took part in the raid, confirmed that the police did not have a warrant but also said they did not need one.

“The search warrant would be necessary if they were searching for drugs or illegal card games, but in this instance it’s OK if the local administrator is there,” said Ye Win Tun.

He said the search lasted two hours and was carried out by the district police chief, township police officer, immigration officer, police special branch and several police officers, a total of about 25 people.