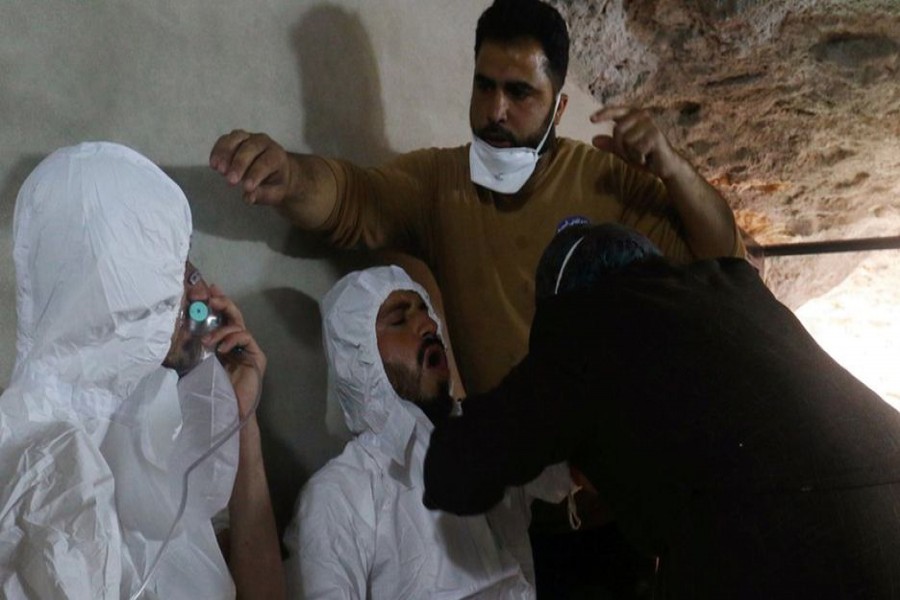 Some victims taking treatment at a hospital. A nerve gas attack on the town of Khan Sheikhoun in April killed more than 80 people. — Reuters file photo

Russia has vetoed a UN Security Council resolution that would have extended an international inquiry into chemical weapons attacks in Syria.

It is the 10th time Moscow has used its veto powers at the UN in support of its ally since the conflict began, reports BBC.

US ambassador to the UN, Nikki Haley, accused Russia of undermining the organisation's ability to deter future chemical attacks.

The Russian ambassador dismissed the criticism.

The Joint Investigative Mechanism (JIM) was set up in 2015 to identify perpetrators of chemical attacks. It is the only official mission investigating the use of chemical weapons in Syria.

Moscow strongly criticised the inquiry when it blamed the Syrian government for a deadly nerve agent attack on the town of Khan Sheikhoun in April. Syria denies using banned chemical weapons.

"Russia has killed the investigative mechanism which has overwhelming support of this council," she said.

It has also found that Islamic State militants used sulphur mustard in one attack.

The Security Council rejected a Russian-drafted resolution to extend the inquiry but with changes to membership of the panel. The draft also called for the panel's findings on Khan Sheikhoun to be put aside.

Russian ambassador Vassily Nebenzia said it was Western countries who had sabotaged the inquiry.

"Some council members refused to support our draft and now they have full responsibility for terminating the JIM," he said.

"This just proves again that the anti-Damascus fever is the only real priority for them and that they have manipulated the JIM for their own purposes."