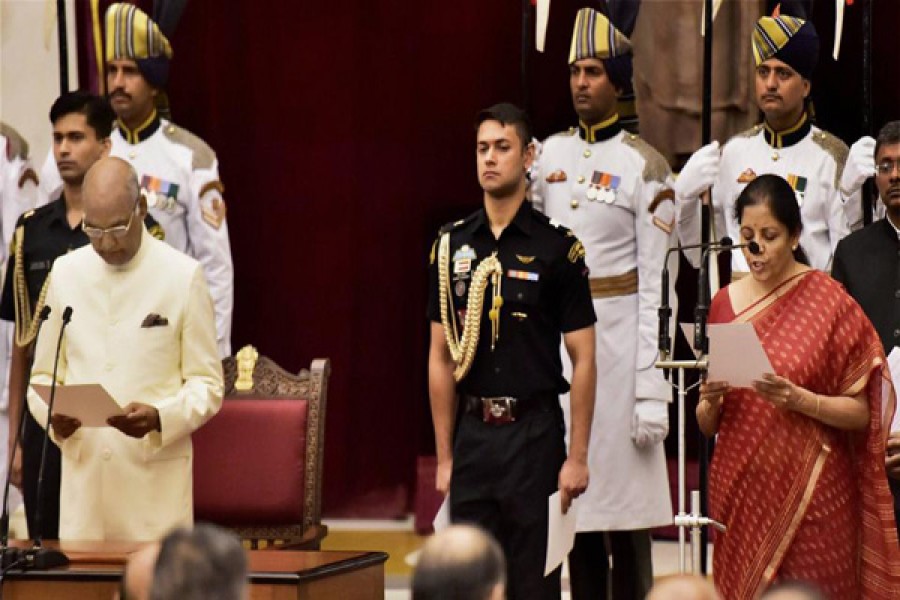 Nirmala Sitharaman, who was promoted to the cabinet rank on Sunday, would be India’s new defence minister.

A fresh set of ministers have been inducted into the Narendra Modi-led NDA government, the third reshuffle since 2014.

Nine new ministers were into the council of ministers and four have been promoted to the Union Cabinet, reports by Indian news portals.

The three new Ministers of State with independent charge are RK Singh (Power, New and Renewable Energy), Hardeep Puri (Housing and Urban Affairs) and KJ Alphons (Tourism, Electronics and IT).

Suresh Prabhu, who lost his Railway portfolio, has been shifted within the Cabinet to the Commerce and Industry Ministry, earlier held by Sitharaman.

Nitin Gadkari, who was holding Road Transport and Highways and Shipping, will also head the Water Resources, River Development and Ganga Rejuvenation Ministry.

Sitharaman takes over from finance minister Arun Jaitley who had been doubling up as the defence minister after Manohar Parrikar left for Goa in March to take over as the chief minister.

The 58-year-old Sitharaman, who was earlier minister of state for the commerce and industry ministry, is only the second woman defence minister of the country and the first independent woman minister to hold the charge of the important portfolio.

Sitharaman takes over at a time when world order is changing at a swift pace, with China getting increasingly assertive in the neighbourhood and the Indian Ocean.