Migration on the rise as climate shocks grow 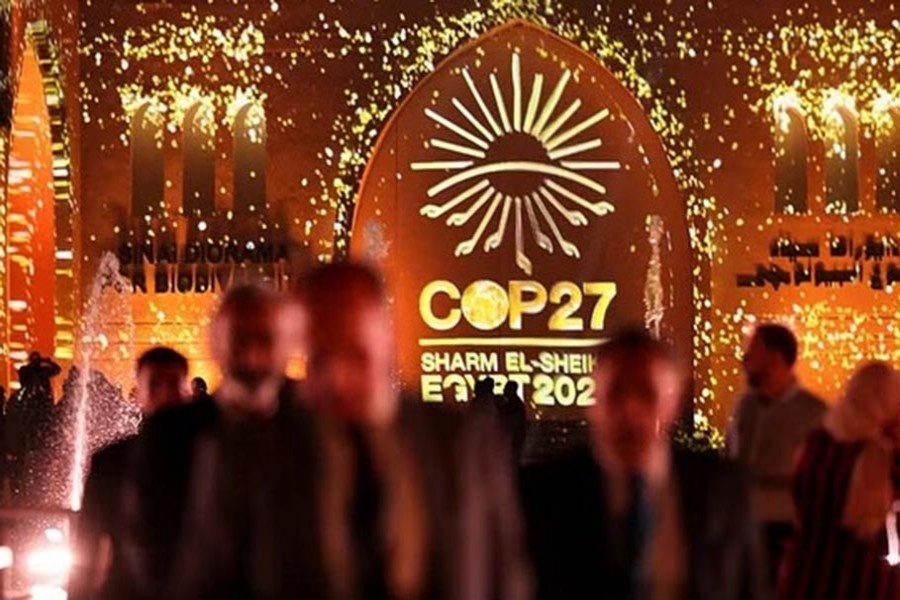 People pass in front of a wall lit with the sign of COP27 as the COP27 climate summit takes place, at the Green Zone in Sharm el-Sheikh, Egypt, Nov 10, 2022.REUTERS

Tina Stege's atoll home in the Marshall Islands is two metres (6.5 feet) above sea level and so narrow that "you can see the ocean on both sides of the land almost anyplace you are," she said.

That leaves little room for retreat from rising seas, as climate change heats oceans and fuels melting of the world's ice, according to Reuters.

In coming years, keeping the Pacific nation's about 60,000 people above the waves would require investing tens of billions of dollars in physically elevating homes and infrastructure, Stege said - money unlikely to be found.

"In my country, there is no higher ground," noted Stege, the climate envoy for the Marshall Islands, during an event at the COP27 UN climate talks in Egypt.

"If we're going to have higher ground, we need to build it."

Migration is the more likely eventual option for Stege and her neighbours - and for millions of other people around the world now struggling to remain in homes battered by climate change impacts, from sea level rise to droughts and storms.

"We should not be so naive to think in the current circumstances people will not move," said António Vitorino, director general of the International Organization for Migration (IOM).

Climate change is already having "profound impacts on human mobility," he said at COP27.

How many people might migrate as climate pressures grow is nearly impossible to estimate with any accuracy, not least because the scale and timing of climate shocks is hard to predict, and because whether people move depends on a huge range of factors, including how much help they get for recovery.

In 2021, about 23.7 million people were uprooted within their own countries, usually temporarily, as a result of disasters, many related to weather extremes, according to the Internal Displacement Migration Centre.

Without serious and rapid action to deal with climate change, about 216 million people could be internal climate migrants by 2050, according to the World Bank.

Most climate change-related migration still occurs within countries, rather than across international borders, migration experts say - although migrants from low-lying small island nations may not have that option.

Furthermore, distinguishing conflict refugees from climate-driven migrants is also getting harder, as the two crises fuel each other, said Michael Köhler, acting head of the Directorate-General for European Civil Protection and Humanitarian Aid Operations.

In Africa's Sahel region, for instance, water shortage and agricultural failures as a result of drought have displaced families and made it easier for extremist groups to recruit young people desperate for an income - which then in turn fuels conflict, experts said.

"The distinction between climate crises and humanitarian crises is becoming more and more artificial," Köhler said at COP27. "We have to think of both things together."

Andrew Harper, special advisor on climate action to the UN refugee agency (UNHCR), said many areas of the world are also now being hit by such relentless spells of disasters that efforts to help people adapt to a shifting climate are failing.

In parts of Mozambique, where about a million people are displaced, in part by lingering civil strife, families are hit by "cyclone after cyclone ... and if they're not being hit by a cyclone they're being hit by droughts," Harper said.

To try to hold the line on climate-related migration, much greater efforts - and more money - are needed now to help vulnerable people adapt to changes and build resilience to shocks, said Rabab Fatima, a UN representative for small island developing states and least-developed nations.

"For all these vulnerable country groups there is an urgent need to increase adaptation funding," she said at COP27.

"We need a global surge in adaptation investment to save millions of lives from climate carnage."

However, a promised $100 billion in annual funding by 2020 - promised by wealthier nations to help vulnerable countries grow cleanly and adapt to climate threats - remains only partly delivered, which has been a sore point at the UN talks.

Vitorino, of the IOM, said that in addition to adaptation spending, investment in better early warning systems and in humanitarian aid innovations such as "anticipatory action" could help limit migration.

Anticipatory action involves measures including delivering small amounts of cash to families days ahead of a forecast disaster, giving them resources to prepare.

In 2020, for example, the UN World Food Programme (WFP) gave such transfers to 142,000 people in Bangladesh five days ahead of an expected flood.

As a result, families were a third less likely to go hungry during the disaster, said Gernot Laganda, WFP's climate and disaster risk reduction chief.

The UN Food and Agriculture Organization (FAO) calculates that for each dollar given of such aid, $7 in damages is saved.

But even stepped up efforts to protect people will not prevent all climate-related migration, Vitorino said, noting that plans for "safe, orderly" movement were also needed.

"Right now, tens of thousands of people are losing their homes and moving. There is no humanitarian help, no existing system for that," said Saleemul Huq, director of the International Centre for Climate Change and Development in Bangladesh.

"It's the responsibility of the UNFCCC (UN Framework Convention on Climate Change) to come up with a solution," he said, calling such movement a form of growing "loss and damage" from climate change.

In Africa, Uganda now has an "open-door policy" on accepting refugees - something that remains uncommon - said Beatrice Atim Anywar, the country's environment minister, urging more countries to follow its lead.

But climate-displaced migrants from within Uganda's own borders are also increasingly evident in the country's capital, said Rose Kobusinge, a Ugandan climate justice activist working on migration issues.

Uganda's northeast Karamoja region, for instance, has been increasingly slammed by drought and food insecurity, she said, making survival harder for the arid region's herders.

Now "we have so many kids, young girls and women from Karamoja on the streets of Kampala," Kobusinge lamented.