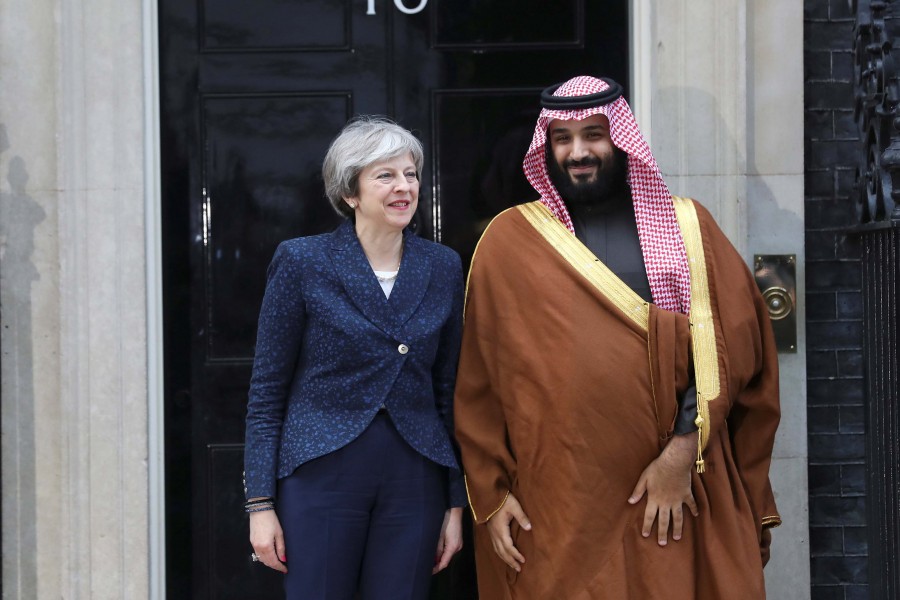 A fiery exchange in parliament between May and opposition leader Jeremy Corbyn underlined tension in Britain over Prince Mohammed’s trip, which was aimed at building a broader economic partnership between the two countries, but instead has sparked anger about alleged human rights abuses and the war in Yemen.

“The link that we have with Saudi Arabia is historic, it is an important one, and it has saved the lives of potentially hundreds of people in this country,” May said, pausing her answer briefly as opposition lawmakers cried “Shame!”. She was alluding to intelligence-sharing on Islamist militant suspects.

The debate took place as Prince Mohammed lunched with the British monarch on the first leg of a trip packed with displays of diplomatic affection designed to help widen long-standing defense ties into a more far-reaching partnership.

Britain is looking for trading partners as it exits the European Union, and energy powerhouse Saudi Arabia needs to convince skeptical investors about its domestic reforms.

But demonstrators gathered outside May’s office amid a heavy police presence to protest at both countries’ role in Yemen, where war has killed around 10,000 people. A Saudi-led coalition intervened militarily in Yemen in 2015 and critics say Riyadh has been using British-supplied weapons in devastating strikes.

“I don’t believe that someone like Mohammed bin Salman should be welcomed in Britain,” said Hassan Yassine, a 25-year-old customer service worker from London. “It is definitely not ethical, bearing in mind what is going on in Yemen every single day, every single second, even as we speak.”

Corbyn said British military advisers were “directing the war” in Yemen. May’s spokesman said British personnel had no role in carrying out coalition air strikes, and were not involved in Saudi targeting decisions.