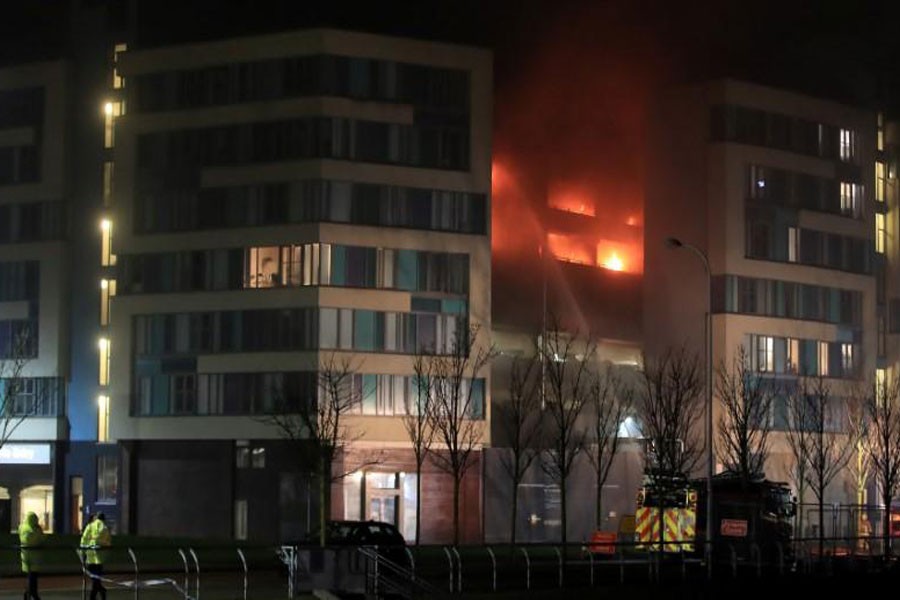 Firefighters tackle a fire during a serious blaze in a multi-storey car park in Liverpool, Britain, December 31, 2017. (REUTERS)

A huge fire that broke out at a car park in the northern English city of Liverpool destroyed hundreds of vehicles and prompted the evacuation of multiple buildings in the surrounding area on Sunday.

All cars inside the multi-storey Kings Dock car park, which has a capacity of 1,600 vehicles, had been destroyed, and owners should contact their insurance companies, reports Reuters quoting police.

An international horse show that had been scheduled to take place at the Liverpool Echo Arena, next to the car park, was cancelled.

Organisers said all people and horses involved were safe.

The Merseyside Fire and Rescue Service said initial investigations indicated that an accidental fire within one vehicle had caused others to ignite.

Firefighters equipped with breathing equipment were still fighting the blaze six hours after they were called to the scene.

Liverpool City Council opened a reception centre for people who were unable to get home because of the blaze.

The city’s mayor, Joe Anderson, visited the scene, which he described on Twitter as a major incident.

“The people of Liverpool never let us down with their generosity and everyone has now been accommodated or given a lift. A big thank you to everyone who called to offer help,” he said.