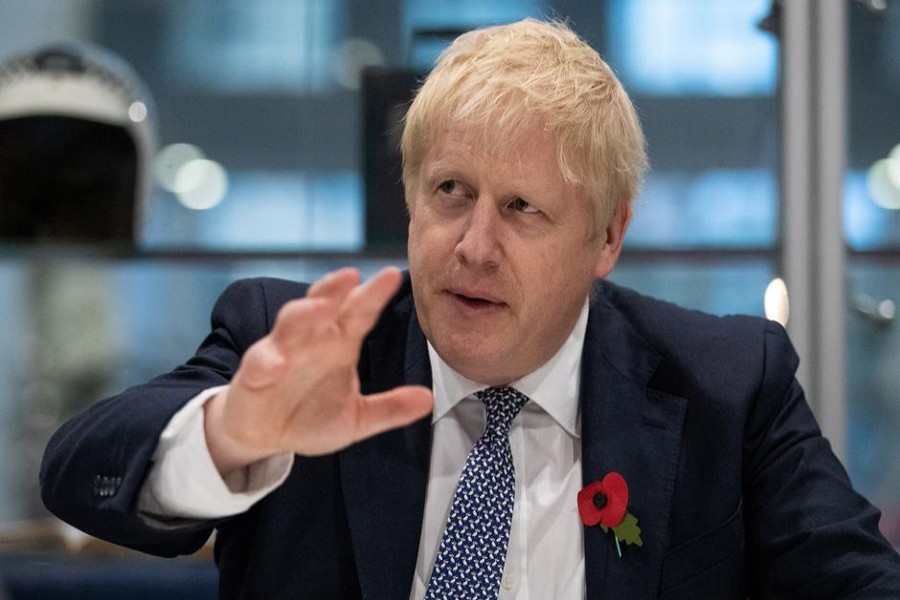 British Prime Minister Boris Johnson drew an angry backlash from Brexit Party leader Nigel Farage on Saturday after he rejected calls to drop his Brexit deal and embrace a clean break from the European Union, potentially splitting the eurosceptic vote.

Johnson had previously pledged to take Britain out of the EU with or without a deal on October 31, before lawmakers voted to force him to seek an extension until January 31.

But he has abandoned the threat of a no-deal Brexit in his Conservative Party’s manifesto for the December 12 election, the Times newspaper reported on Saturday. It added that the focus would be on getting his Brexit deal approved.

On Friday, Johnson rejected a call from the Brexit Party to drop the deal he negotiated with the European Union last month in order to form a new electoral pact, saying that he could put his deal through parliament after any election win.

“What we’ve got is a fantastic deal that nobody thought we could get,” Johnson said. “As soon as we get back in the middle of December, we can put that deal through.”

In Britain’s tortuous journey since the 2016 referendum vote to leave the EU, businesses and economists have cautioned that leaving the bloc without a deal to smooth the transition would hurt the British economy, according to Reuters news agency.

Proponents of a no-deal Brexit say it provides a clean break from EU rules and regulations.

“If The Times are right and Boris Johnson will abandon a clean break Brexit, and he wins an election on this, we will never be free of EU rules,” Brexit Party Leader Nigel Farage said in a tweet.

“The deal is simply not Brexit and does not get Brexit done.”

“So bad” for Britain

The Conservative manifesto will also not include a commitment to a fiscal rule, the Times reported, relaxing the government’s grip on public finances. The party did not immediately respond to a request for comment.

The government’s previous fiscal rule pledged to hold the underlying budget deficit below 2% of the country’s economic output in the 2020/21 financial year.

The leaders of the opposition Labour, Liberal Democrat and Scottish Nationalist parties addressed supporters separately across Britain on Saturday, exhorting them to brave the weather to campaign in the country’s first December election since 1923, called to break the impasse over Brexit.

US President Donald Trump said Labour leader Jeremy Corbyn would be “so bad” for Britain in an interview with Farage on Thursday.

On Saturday, Corbyn warned of the dangers of a trade deal with the United States, saying it threatened Britain’s public National Health Service, a claim Johnson and Trump both deny.

“We will not go down that path under any circumstances. Our public services, our national health service is not for sale, to Donald Trump or anybody else.”

Both major parties face battles on at least three fronts: Against each other, with the hardline Brexit Party, and with the Liberal Democrats who aim to win over those opposed to Brexit altogether.

Opinion polls give Johnson a sizeable lead over Labour, but also suggest that more than 10 per cent of voters back the Brexit Party - enough to split the pro-Brexit vote in some seats and hand victory to Labour.

The Scottish National Party (SNP) are also looking to wipe away Conservative gains made in 2017 as they push for another referendum on Scottish independence.