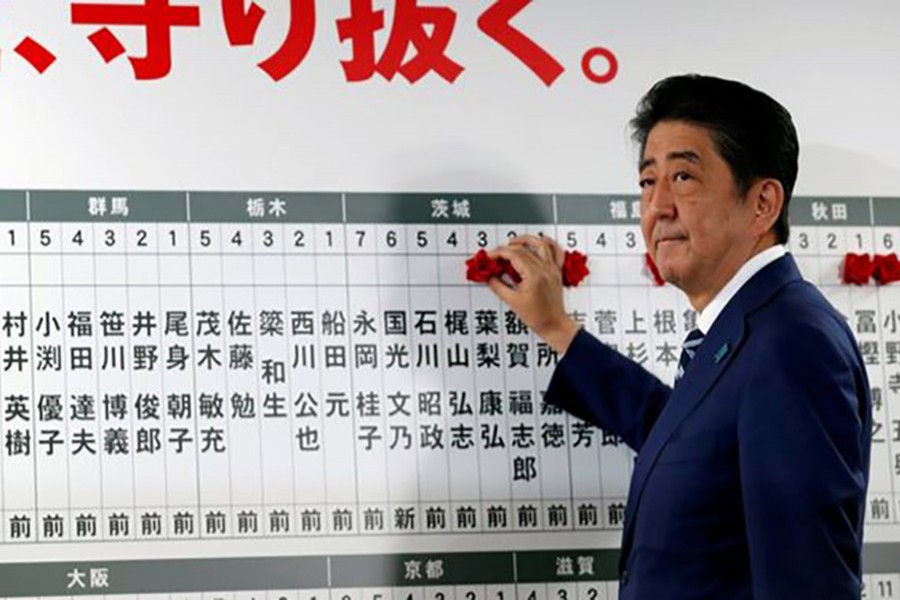 Japan's Prime Minister Shinzo Abe, leader of the Liberal Democratic Party (LDP), puts a rosette next to his name after the lower house election on Sunday. - Reuters

Mr Abe had called an early election for an increased mandate to deal with "crises" facing Japan, including the threat from Pyongyang.

Local media report Mr Abe's ruling coalition has retained its two-thirds majority in parliament, according to a report published on BBC.

This paves the way for Mr Abe to amend Japan's post-war pacifist constitution.

The prime minister has previously called for the existence of the country's armed forces to be formalised, a controversial move which he says is needed to strengthen Japan's defence but which critics say is a step towards re-militarisation.

Speaking after the exit polls, Mr Abe said: "As I promised in the election, my imminent task is to firmly deal with North Korea.... For that, strong diplomacy is required."

The BBC's Rupert Wingfield-Hayes in Tokyo says Mr Abe's victory is partly thanks to Pyongyang's actions.

Just two months ago his popularity was plummeting as he was caught up in two messy political scandals, says BBC correspondent, but he enjoyed a sudden recovery after North Korea fired two missiles over the Japanese island of Hokkaido in recent months.

Local news outlets reported that Mr Abe's ruling Liberal Democratic Party (LDP) coalition with the Komeito party has won 312 of the 465 seats in the lower house of Japan's parliamentary Diet - which gives them the power to table a revision to the constitution.

Mr Abe had previously announced he wanted to revise a clause which renounces war, known as Article 9, to formally recognise Japan's military, which is known as the "self-defence forces".

He said he was ditching a previously-set deadline of 2020 to achieve the revision so that he would have more time to "gain support from as many people as possible" for the highly contentious task.