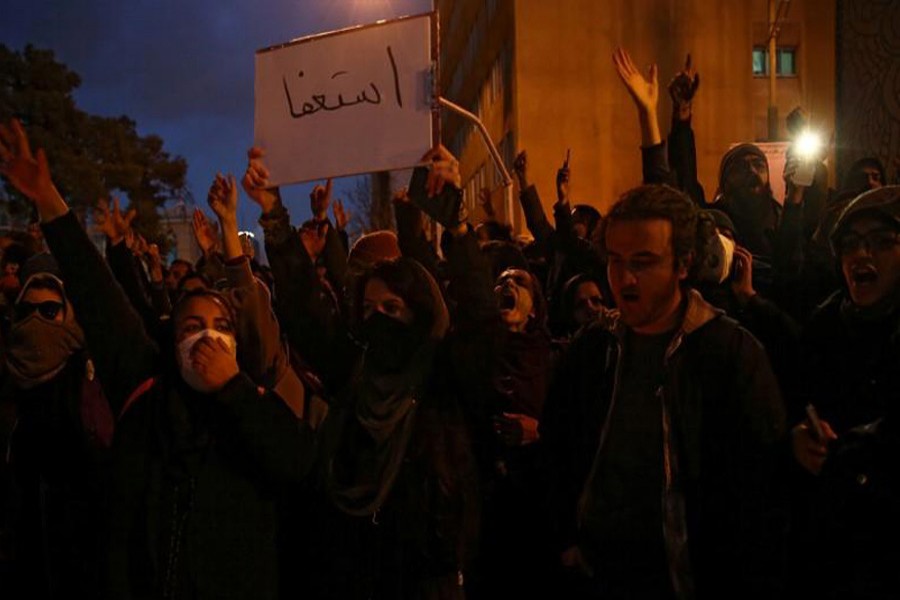 Iranian people gather to show their sympathy to the victims of the crash of the Boeing 737-800 plane, flight PS 752, in Tehran, Iran, January 11, 2020 — Nazanin Tabatabaee/WANA (West Asia News Agency) via Reuters

Iran’s clerical rulers risk a legitimacy crisis as popular anger has boiled up at the way the state handled a passenger plane crash, which the military took three days to admit was caused by an Iranian missile fired in error.

Amid mounting public fury and international criticism, the belated admission of blame by Iran’s elite Revolutionary Guards has squandered the national unity seen after the killing of the country’s most influential commander in a US drone strike in Iraq on January 03.

Huge crowds had turned out on the streets of Iranian cities to mourn Qassem Soleimani’s death, chanting “Death to America”.

But since the Ukraine International Airlines plane crashed on Wednesday - an incident Canada and the United States said early on was due to an Iranian missile albeit fired by mistake - social media has been ablaze with criticism of the establishment. All 176 people on board the plane, en route from Tehran to Kiev, were killed.

That mood bodes ill for a parliamentary election in February, when Iran’s rulers typically seek a high turnout to show their legitimacy even if the outcome will not change any major policy.

But instead they are now hearing more rumblings of discontent, after anti-government protests in November in which hundreds of people died.

“It is a very sensitive time for the establishment. They face a serious credibility problem. Not only did they conceal the truth, they also mismanaged the situation,” said a senior former official, who spoke on condition of anonymity.

Since the 1979 Islamic revolution, Iran’s clerics have swept aside challenges to their grip on power. But the kind of distrust between the rulers and the ruled that erupted in protests last year may now have deepened.

“There will be a short-term blow to the regime’s credibility and this will aid the pressure on the regime from the economic and political problems it had before the latest standoff with the U.S.,” said Daniel Byman, senior fellow for foreign policy at the Brookings Institution’s Center for Middle East Policy.

‘Death to the dictator’

Video clips on Twitter showed protesters in Tehran on Saturday chanting “Death to the dictator,” a reference to Supreme Leader Ali Khamenei. Reuters could not independently verify the footage. It followed a welter of criticism in Iran.

The Guards issued an apology for shooting down the plane, saying air defences were fired in error during a state of high alert. Iran had expected USreprisals after it retaliated for Soleimani’s killing by firing missiles at Iraqi bases where US troops were stationed.

One hardline official said the mistake should not be turned into a political weapon against the establishment and the Guards, a parallel force to the conventional army that answers directly to Khamenei and is a guardian of the theocratic system.

“Let’s avoid being so harsh. It was a sensitive time and everyone was nervous. You cannot ignore what the Guards have done to protect the nation and this country since the revolution,” the security official told Reuters.

But Khamenei, who has always cited turnout at elections as a sign of the legitimacy of the system of clerical rule, may now find Iranians are not so keen to show their support.

“Why should I vote for this regime. I don’t trust them at all. They lied to us about the plane crash. Why should I trust them when they don’t trust people enough to tell the truth?,” said Hesham Ghanbari, 27, a university student in Tehran.

The government is already struggling to keep the economy afloat under increasingly tough US sanctions, imposed by Washington after it withdrew in 2018 from Tehran’s nuclear deal with world powers. Vital oil exports have been slashed.

“This tragedy will not be forgotten nor is it easy to overcome for the population under sanctions and pressure not just from abroad but also from the state,” said Sanam Vakil, senior research fellow at Middle East and North Africa Program, Chatham House.

“This incident is a stark reminder of the gaping lack of governance,” said Vakil.

The clerical system has survived more severe challenges in the past, including a crippling eight-year war with Iraq in the 1980s.

But its bedrock of support, the poor and lower middle classes who have most benefited from state largesse in the past, were among the first on the street in November in protests sparked by a hike in gasoline prices - a particularly sensitive issue where many rely on cheap fuel.

Protesters’ demands swiftly turned more political, including calls for their rulers to go, before authorities cracked down.

Learning that Iranian forces shot down a plane, whether by accident or not, is a further blow. Many of the passengers were dual national Iranians.

Social media was flooded with angry comments from Iranians, many complaining that the authorities had spent more time denying they were to blame for the plane crash than sympathising with victims’ families.

“It has shocked the public. Once more, the regime carelessly kills its own people,” said Ray Takeyh, senior fellow for Middle East studies at the Council on Foreign Relations.

“It punctures the already spurious narrative that the killing of Soleimani has united the Iranian people behind their government,” he said.

Alongside the parliamentary vote, the elections on February 21 will also choose members of the Assembly of Experts, a clerical body that in future will be responsible for selecting a successor to 80-year-old Khamenei.

Khamenei, who has no term limit, has been in office since the death in 1989 of the founder of the Islamic Republic, Ayatollah Ruhollah Khomeini.