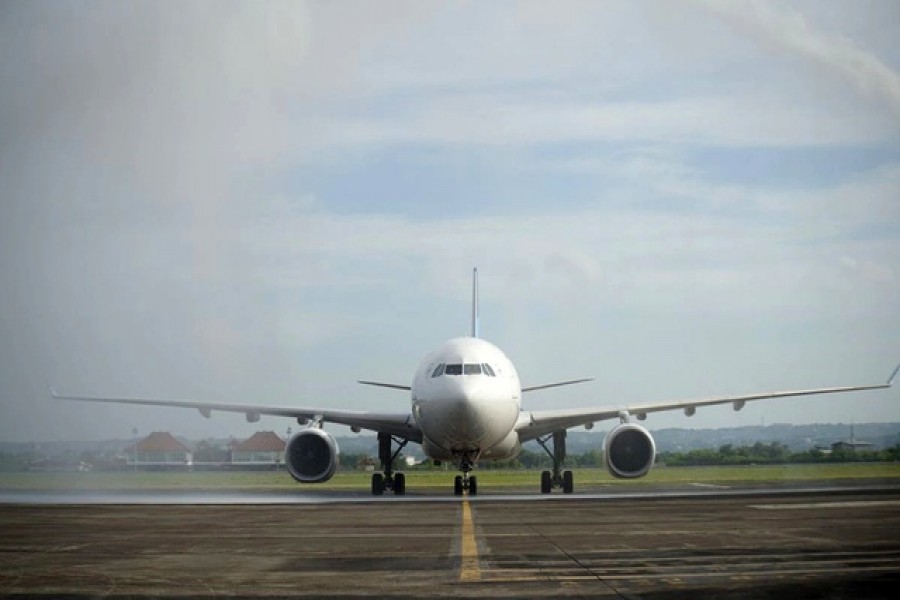 Garuda Indonesia aircraft flight GA881 carrying passengers from Narita, Japan, is sprayed with water upon its arrival at I Gusti Ngurah Rai International airport, as Bali welcomes its first direct flight carrying foreign tourists in nearly two years, after it was closed for foreign visitors due to the coronavirus disease (COVID-19) pandemic, in Badung, Bali, Indonesia February 3, 2022 – Courtesy of Garuda Indonesia via Reuters

Indonesia has temporarily banned foreign tourists entering the country through Jakarta's airport, the transport ministry said, in a bid to slow a spike in coronavirus infections driven by the Omicron variant, Reuters reports.

The Southeast Asian country has seen a jump in cases, with more than 36,000 infections recorded on Sunday and the bed occupancy rate at hospitals in the capital reaching 63 per cent.

The new regulations apply to foreign tourists and Indonesians who have travelled abroad for holidays, the ministry said in a statement released late on Sunday.

The decision to "temporarily restrict tourist arrivals" was intended to slow the spread of the coronavirus, said Novie Riyanto, director general for civil aviation at the ministry.

Tourists flying from abroad will still be able to arrive at Bali airport, as well as at Batam and Tanjung Pinang in the Riau Islands near Singapore.

Police have also implemented a curfew in downtown Jakarta from midnight to 4 a.m. as infections have kept climbing.

Indonesian officials have warned that the surge in cases driven by the Omicron variant may not peak until late February.

Despite these concerns, the resort island of Bali welcomed a flight from Tokyo last Thursday carrying six foreigners, mostly travel agents who were on board to monitor the island's readiness to receive foreign tourists.

Bali officially opened to foreign visitors from 19 countries last October, but with no non-cargo flights until last week foreign tourists have been limited.