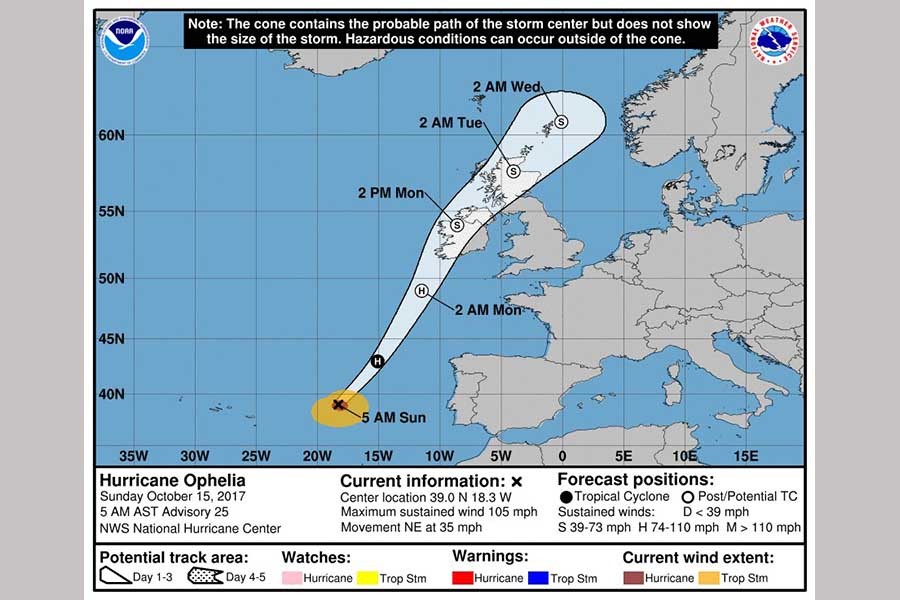 Hurricane Ophelia picked up pace as it marched toward Ireland, where it's forecast to bring strong winds and heavy rains this week.

Ophelia weakened from a Category 3 to a Category 2 hurricane early Sunday, with sustained winds of 165 kilometres per hour (105 mph).

But the storm accelerated on its way to the British Isles and was moving quickly northeast at 56 kilometres per hour (35 mph), reports CNN.

"Preparations to protect lives and property should be rushed to completion by this afternoon," the National Hurricane centre warned in its Sunday 5 a.m ET (10 a.m. Dublin time) advisory.

The centre said Ophelia gale force winds were expected in southern Ireland by early Monday, spreading gradually north across the country during the day. Hurricane-force winds are forecast to arrive by Monday afternoon, spreading inland into Monday night.

"Wind speeds atop and on the windward sides of hills and mountains are often up to 30 % stronger than the near-surface winds indicated in this advisory, and in some elevated locations could be even greater," the centre said.

Ophelia is also forecast to produce 2 to 3 inches of rain with isolated totals nearing 4 inches through Tuesday across western Ireland and Scotland.

"A dangerous storm surge is expected to produce significant coastal flooding near and to the east of where the centre makes landfall. Near the coast, the surge will be accompanied by large and destructive waves," the centre warned.

The fast-moving storm has weakened slightly since Saturday, when it was packing 185 kilometre per hour (115 mph) sustained winds.

"Some additional weakening is expected today and on Monday, but Ophelia is forecast to become a powerful post-tropical cyclone with hurricane-force winds as it approaches Ireland on Monday," the NHC said.

"The odd part about Ophelia is seeing this intensification take place in what's normally a much cooler region of the Atlantic Ocean," CNN Meteorologist Allison Chinchar said.

"Wind is going to be the biggest factor," Chinchar said of the forecast for Ireland, Northern Ireland and Scotland, where wind gusts could reach 130 kph (80 mph). The coasts of Portugal and Spain will see wind gusts of up to 90 kph (56 mph).

Chinchar said because the storm is racing along at more than 44 kph (28 mph), it won't have much of a chance to deluge Ireland.

It said the storm could bring fierce winds "potentially causing structural damage and disruption, with dangerous marine conditions due to high seas and potential flooding."

The council of County Kerry said that sandbags had been distributed to low-lying areas.

"Tidal surges are expected in coastal areas with some flooding likely in coastal regions though the severe risk is expected from high winds and the possibility of fallen branches and trees," it said in a statement.

The Met Office in the UK said there were yellow wind warnings for Northern Ireland and parts of Great Britain for Monday and Tuesday.

But it said some areas would have high temperatures over the weekend "in part, due to the influence of (the storm), which will draw up very warm air from Spain on its eastern flank."

"Although parts of the UK may experience severe conditions, it's important to realise that not all areas will be affected by this ex-hurricane. For example, much of eastern England will be unusually warm for the time of year but quite breezy on Monday and Tuesday."