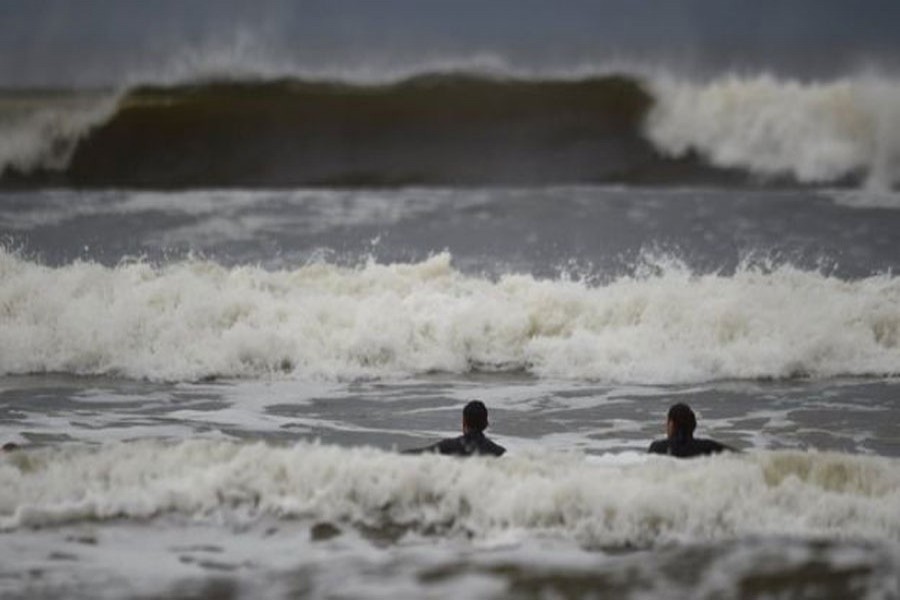 The Republic of Ireland's Met Eireann has issued a red wind warning across the country. Reuters photo

The Met Office has warned of "potential danger to life" as the remnants of Hurricane Ophelia head for the British Isles with 80mph (130km/h) winds.

An amber warning for Northern Ireland, where all schools are to be closed on Monday, is in force from 15:00 BST.

In the Republic of Ireland, Met Eireann has issued a red wind warning and the government has deployed the army.

The hurricane will have weakened to a storm when it hits the UK on Monday, 30 years after the Great Storm of 1987.

The BBC's Ireland correspondent, Chris Page, said it would be the most severe storm to hit the island of Ireland in half a century.

Ophelia is on its way from the Azores in the Atlantic Ocean.

Met Eireann meteorologist Joanna Donnelly told BBC Breakfast that "hurricane-force winds" were expected at Ireland's southern coast at around 10:00 BST, but the "real impact" for the Republic of Ireland will be about midday.

Dublin Airport said while early morning flights were operating as normal, up to 90 flights are expected to be cancelled when the storm hits later.

Belfast Airport said flights were scheduled to operate as normal, but passengers should check with their airline.

Ryanair and Aer Lingus have also cancelled flights due to severe weather.

All schools and colleges in the Republic of Ireland, where "violent and destructive gusts" are forecast, will also be shut.

It has been downgraded to a category one hurricane by the US National Hurricane Center and is forecast to continue gradually weakening.

The Met Office said there was a "good chance" Northern Ireland could be hit on Monday afternoon by power cuts, flying debris, large waves in coastal areas and disruption to all travel services.

It also issued a yellow warning of "very windy weather", which it updated later on Sunday morning to take in much of northern England and Wales, along with parts of southern and central Scotland.

Three battalions of soldiers - 1,200 personnel in total - are on permanent standby to deal with major incidents in the UK, but the Ministry of Defence said no specific requests had yet been made of them by local authorities.

The Republic of Ireland's Met Office predicts coastal areas will be hit by winds in excess of 80mph (130km/h) from 09:00 BST on Monday until Tuesday and is warning against unnecessary travel.

Gerald Fleming, head of its general forecasting division, told Irish broadcaster RTE: "The track is very consistent [and] has been for days.

"The strongest winds [will be] along the south coast.

"That'll be tomorrow morning, and it'll track up the centre again, going up along the western part of the country."

BBC Weather said Monday would be a "day of huge contrasts" with the strong gusts of wind travelling over the Irish Sea and heading north to central and southern Scotland, sparing eastern parts of the UK.

Eastern England is instead expected to enjoy unseasonably warm weather, with temperatures of 22C or 23C on Monday - compared with an average for mid-October of 15C.

Highs of 24C were recorded in the region on Saturday as some parts of the country basked in a "mini heatwave" thanks to warm air brought by Hurricane Ophelia.

Ophelia set the record for the most easterly category three hurricane in the Atlantic.

Category three hurricanes are defined as having wind speeds of between 111mph (179km/h) and 129mph (208km/h) and can cause major damage to well-built homes.