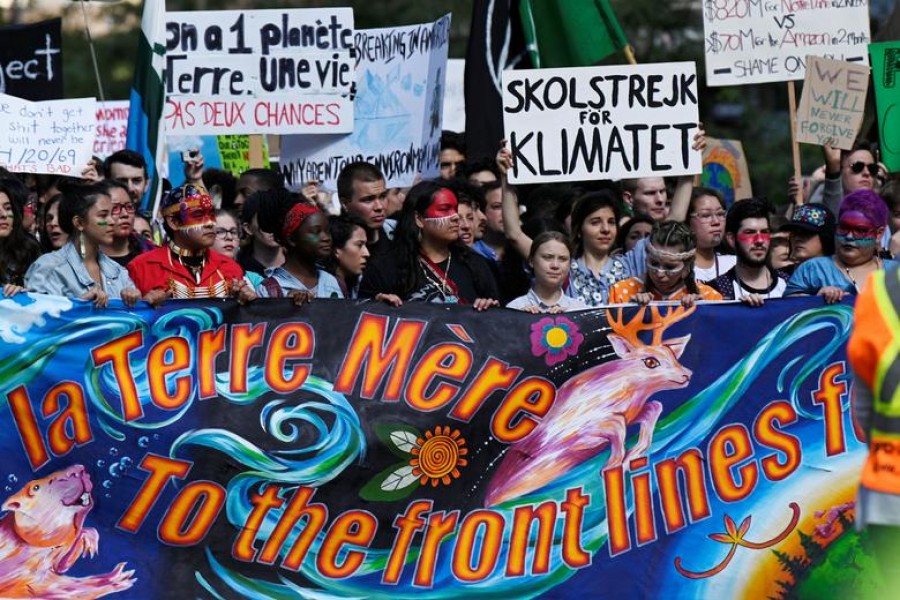 Hundreds of thousands of people have joined climate strike marches across Canada, with almost 100 events planned in cities and towns.

Protesters are taking part in the global climate strike movement, which has seen people around the world take to the streets.

The 16-year-old - who on Monday chastised world leaders at the United Nations over their failure to do more - spoke in Montreal at the start of strikes in the city, which are expected to draw more than 300,000 people.

"It is very moving to see everyone, everyone who is so passionate to march and strike," she told reporters. "It is a very good day, I would say."

During her visit, Ms Thunberg will receive the key to the city from Montreal Mayor Valérie Plante.

Organisers say half a million people have gathered in the eastern city of Montreal alone. Officials told local media the number was closer to 315,000.

These figures place the Montreal event among some of the most attended environmental marches in history. The September 2014 People's Climate March in New York attracted at least 310,000, reports the BBC.

Schools, colleges and universities suspended all or some classes for the day, and the city government and some businesses have encouraged staff to take the day off. City public transit is also free for the event.

The march was mostly peaceful, though a man was tackled by police and arrested after approaching Prime Minister Justin Trudeau.

Léa Ilardo, 21, a university student helping to organise the march, told the BBC she hopes it serves as a demonstration of how important it is to take climate action.

"Why should we study or work when the survival of humanity and the planet is called into question?" she said.

Ron and Sue Alward, both in their 70s, activists for decades, said popular interest in environmental issues "waxes and wanes depending on some unsuspected event, like say, Greta [Thunberg]".

But Mrs Alward said that the real problem remains: "How do we get the politicians on board? The whole system needs to change".

The march takes place in the middle of Canada's federal election campaign - though many of the students expected to take part are not old enough to vote.

Conservative leader Andrew Scheer - who has a large base of support in Canada's oil and gas producing regions - is to be the only leader absent.

He avoided any of the country-wide marches but has said his party will "always support" people raising awareness on climate issues, and some Conservative candidates are expected to attend some events.

In the lead-up to Friday's marches, and amid a global discussion on climate change, all the campaigns have spent the past week laying out their environmental policies, from home energy retrofitting programmes to setting new climate targets.

Among the demands by Climate Strike Canada - the network overseeing the various activist and student groups organising the marches - is a call to reject all new fossil fuel extraction or transportation projects, and to eliminate fossil fuel subsidies.

That would include the Trans Mountain Pipeline expansion project, which is backed by both the Liberals and the Conservatives.

Climate Strike Canada is also calling for net greenhouse gas emissions to be cut 75 per cent over 2005 levels by 2030 - higher than those currently being promised by any of the campaigns.

Canada's current target is to reduce its greenhouse gas emissions by 30 per cent below 2005 levels by 2030.

Ms Ilardo said the students behind this march hope it will help create a "break from the status quo".

"The strike is not the final point," she said. "For us, it's just the beginning."

Food systems that ignore needs of poor are doomed to fail: IFAD