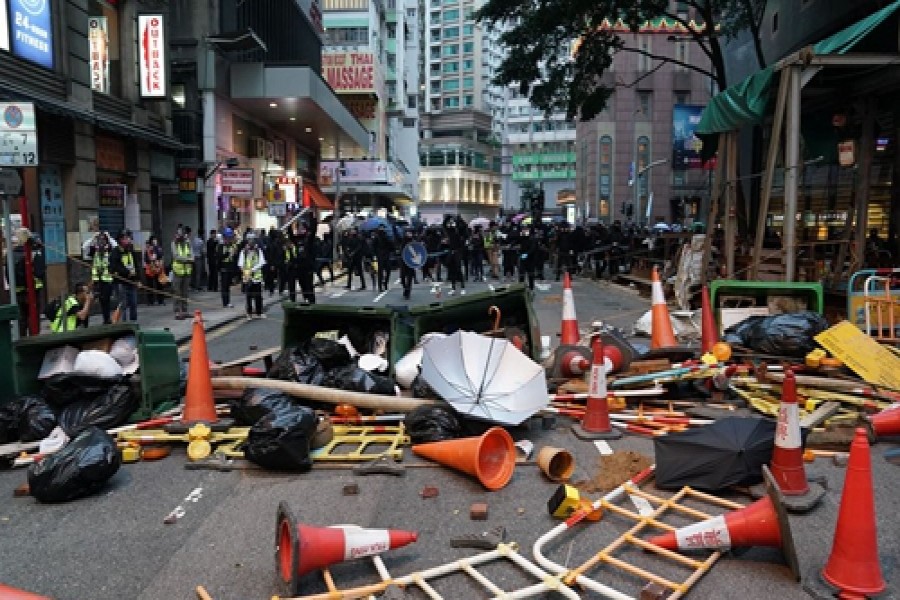 The latest decision to reject the entry of a US-based nongovernmental organization (NGO) executive director won't be the last to show China has been taking countermeasures against external forces, which had interfered in the country's internal affairs like Hong Kong. It also reflects the strong determination of the Chinese central government and Hong Kong Special Administrative Region (HKSAR) government to restore order in the protest-stricken city by protecting its core interests.

A video posted by Kenneth Roth, executive director of Human Rights Watch (HRW), went viral on Twitter on Sunday night. In this video, Roth claimed that after he arrived at the Hong Kong airport Sunday night from New York, the local authorities would not allow him to pass through Customs. He was scheduled to launch the NGO's World Report 2020 on human rights abuses in the city.

Roth said in a tweet that he purposely chose Hong Kong to release the report. "I wanted to spotlight Beijing's deepening assault on international efforts to uphold human rights." He said the decision to bar him from entering the city "vividly illustrates the problem."

The ban came after China decided in December to sanction US-headquartered NGOs, including HRW, for their "horrible activities" in instigating the months-long riots in Hong Kong.

The central government and the HKSAR government always deal with matters related to customs entries in line with the law, and China decides who to allow entry, Geng Shuang, spokesperson of Chinese Foreign Ministry of Affairs, said at a routine press conference on Monday.

"I also want to point out that a large amount of facts and evidence shows that those NGOs support anti-China rioters in Hong Kong, instigating them to take on radical and violent criminal activities, inciting secessionism in Hong Kong," he said, noting that the NGOs should be sanctioned and pay the price for it.

The decision to bar the executive director of HRW from entering Hong Kong is a fair, reasonable move, as his presence would likely spur riots which have rocked the city for months, and won't be helpful for the city to restore social order, officials and analysts said.

"I believe the decision was made based on the current situation in Hong Kong, as the city has been recovering from the chaos. The upcoming report will criticize the HKSAR government and police, which would send a wrong signal and give rioters another excuse to take to the streets to commit radical acts," Joe Chan Cho-kwong, former chairman of the Junior Police Officers' Association of Hong Kong, told the Global Times on Monday.

"Considering the need for public security, it's very reasonable to bar him from entering," Chan said.

The Immigration Department (ImmD) of Hong Kong said on Monday that the department does not comment on individual cases but fully considers all relevant factors and circumstances of a case according to the laws before deciding whether the entry should be allowed or not, according to an e-mail the authority sent to the Global Times on Monday.

As countermeasures to the passage of the so-called Hong Kong Human Rights and Democracy Act, Chinese Foreign Ministry spokesperson Hua Chunying said at a routine press conference in December that China will sanction a number of NGOs, including the National Endowment for Democracy (NED) , the National Democratic Institute for International Affairs (NDI), the International Republican Institute (IRI), Freedom House and HRW, as evidence shows these NGOs have supported anti-China forces who have created chaos in the city, and encouraged those forces to engage in extremely violent criminal acts and hyped separatist activities in Hong Kong.

NGOs, along with other nonprofit groups, have been playing an active role in the Hong Kong protests, which have turned into violence and rampage in the past few months, seriously weighing on the economy and livelihood of Asia's finest financial and business hub.

Some Global Times reporters have witnessed so-called human rights observers helping rioters escape, who provoked and attacked police officers during anti-government protests, or to further impede law enforcement. They sometimes took photos in front of the police officers, preventing them from advancing.

Roth, the proactive activist, has been constantly making remarks about Hong Kong's social unrest by criticizing the Chinese government for suppressing the so-called rights of Hong Kong protesters. He also openly urged world leaders to "push back against the lineup of anti-rights crusaders" who opened the UN General Assembly, taking a harsh stance on other issues related to China's internal affairs, such as video surveillance and Xinjiang.

Roth had held a one-sided view on Hong Kong protesters by praising them for "politely making way for an ambulance" without taking into account the fact that they vandalized public property and set fire to MTR stations.

Rioters set up barricades on streets to block traffic in Hong Kong on Jan. 1, 2020. (Xinhua)

Banning the HRW executive director from entering Hong Kong also reflects the mainland's dissatisfaction with his remarks amid months of social turbulence in the city, and shows that both the central and local authorities won't allow political interference in the name of freedom of speech to affect the Hong Kong situation, Tang Fei, a member of the Chinese Association of Hong Kong and Macao Studies, told the Global Times on Monday.

Carrie Lam, chief executive of the HKSAR government, said in a recent Facebook post that the government would not be soft-handed in setting things right in dealing with "black sheep" teachers and civil servants who violated discipline in social events.

In the name of protecting and promoting human rights, the HRW has actually been helping the US government push forward its political agenda, which would have prevented Hong Kong society from restoring peace, Li Haidong, a professor at the China Foreign Affairs University's Institute of International Relations, told the Global Times.

"It's a political organization," he said.