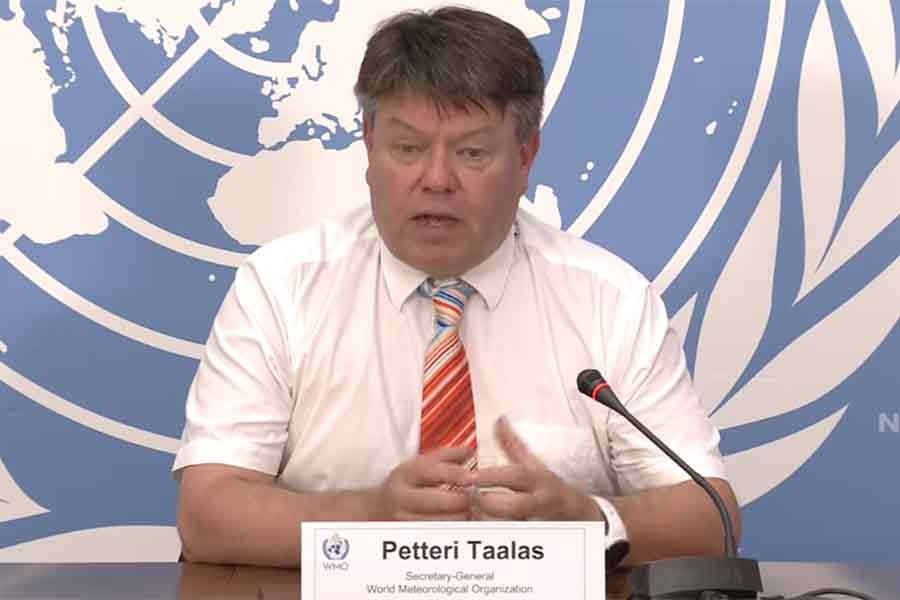 Petteri Taalas, Secretary-General of the WMO

With temperatures expected to remain above normal until the middle of next week, the World Meteorological Organization (WMO) warned that heatwaves will occur more and more frequently, till the decade of 2060.

The pattern is linked to the observed warming of the planet that can be attributed to human activity, raising serious concerns for the planet’s future, the UN weather agency said in a statement on Tuesday.

Petteri Taalas, Secretary-General of the WMO, addressed a press conference to launch the latest extreme weather findings in Geneva.

“The negative trend in climate will continue at least until the 2060s, independent of our success in climate mitigation”, Petteri Taalas said.

Taalas reflected growing concerns over extreme weather patterns, in his sartorial selection on Tuesday, he told journalists, choosing to wear short sleeves and a red and blue tie, in recognition of the increasing number of red alerts flashing up across Europe.

WMO briefed journalists that the European heatwave may not end, until the middle of next week.

He said, “We are expecting to see major impacts on agriculture. During the previous heatwaves in Europe, we lost big parts of harvest. And under the current situation -we are already having the global food crisis because of the war in Ukraine - this heatwave is going to have a further negative impact on agricultural activities.”

In several countries, some economic sectors – including tourism which has only begun to fully recover in the wake of the COVID-19 pandemic - are suffering as a result.

The heatwave also acts as a kind of atmospheric lid, WHO explained, trapping pollutants, and degrading air quality, with adverse health consequences, particularly for vulnerable people such as the elderly. In the major 2003 heatwave in Europe, some 70,000 people died.

“Climate change is affecting our health in many ways, not only by heatwaves which are having direct consequences” but also other areas of essential healthcare, such as rising levels of disease, alerted Maria Neira, Director for public and environmental health at WHO.

She explained that reliable access to food and water is at stake, as with agricultural production levels at risk”, and there will be water scarcity for sure”.

She said that 99 per cent of the global population is breathing air that does not meet the health standards set by WHO, hugely impacting chronic respiratory and cardiovascular conditions.

“The best solution to this will be, again, being very ambitious on tackling the causes of this global warming.

“We have been alerting for a long time that climate change is affecting very much human health”, she emphasised, which will also impact the struggle to reach net zero carbon emissions, and the crucial transition to clean, renewable sources of energy.

More deaths among the elderly and those with pre-existing health conditions are feared due to the ongoing heatwave in the weeks ahead, and subsequent challenges to health systems, to keep up with rising demand.