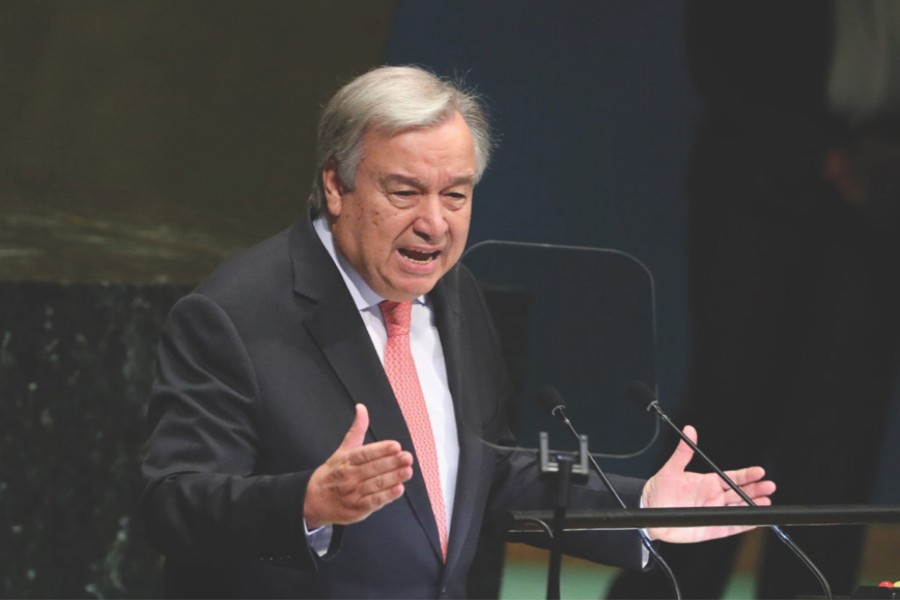 UN Secretary-General Antonio Guterres on Monday urged concrete action at the Climate Action Summit that he convened amid a worsening climate crisis.

"From the beginning, I said the ticket to entry is not a beautiful speech, but concrete action," he added.

In tackling the climate change, he said, "Technology is on our side. Readily-available technological substitutions already exist for more than 70 percent of today's emissions."

He also urged accelerating financial support for climate efforts, including the replenishment of the Green Climate Fund, fulfilling the commitment by developed countries to mobilize 100 billion U.S. dollars a year from public and private sources by 2020 for mitigation and adaptation in developing countries.

Stressing the importance of adaptation, he said even if the world succeeds in reducing emissions, many people are already living with the dramatic effects of climate change. Adaptation has therefore become a top priority and an essential condition for increasing the resilience of countries and communities and avoiding human suffering.

The opening ceremony also included a session of dialogue between Guterres and youth representatives.

Some 100 government, business and civil society leaders, many of them heads of state and government, are expected to speak at the summit.

The meeting serves as a platform for climate leaders to raise political ambition that will result in enhanced and irreversible commitments to action in national climate plans to significantly cut emissions.

The commitments and actions made at the summit will be put in a summary by the UN secretary-general at the end of the meeting.

The Paris Agreement, a 2015 landmark climate accord, pledges to keep global warming "well below" two degrees Celsius above pre-industrial levels and strive for a lower limit of 1.5 degrees Celsius.

In a scientific report released last year by UN climate panel IPCC, it became clear that the world should strive to limit global warming to 1.5 degrees Celsius, or below.

In line with this goal, Guterres asked leaders to come to the summit with pledges consistent with reducing greenhouse gas emissions by 45 percent by 2030 and then to net zero by 2050.

A key principle in the Paris Agreement is that nations will toughen their Nationally Determined Contributions (NDCs) every five years to ratchet up the fight against global warming.

As the first opportunity to do so will be in 2020, the UN summit is seen as a slingshot to the first five-year milestone of the Paris Agreement.

The existing NDCs set the world on track for a rise in emissions of about 10.7 percent above 2016 levels by 2030, according to the analysis of the UN Framework Convention on Climate Change, starkly at odds with the UN secretary-general's call for deep cuts.

On the eve of the summit, the United Nations published a report saying there is still no sign of a peak in global emissions, even though they are growing slower than the global economy.

It said in 2018, global carbon dioxide concentration was 407.8 parts per million (ppm), 2.2 ppm higher than 2017. Carbon dioxide emissions grew 2 percent and reached a record high of 37 billion tons of carbon dioxide in 2018.

Current economic and energy trends suggest that emissions will be at least as high in 2019 as in 2018, the report said.

Citing science, Guterres said on the current path, "we face at least three degrees Celsius of global heating by the end of the century."