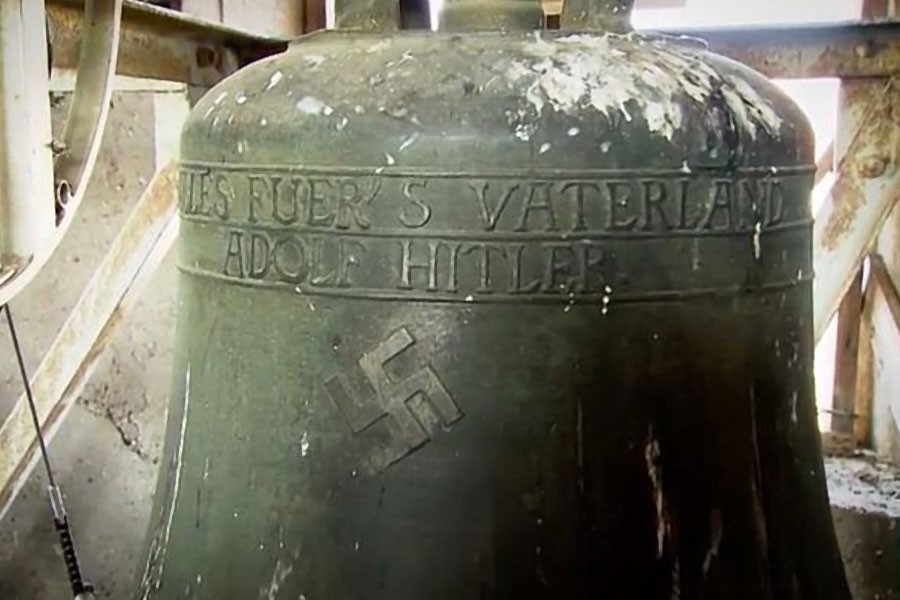 A swastika on a bell in a church in the German town of Schweringen. YouTube photo.

A controversial church bell in Schweringen, northern Germany, has had a swastika inscription removed as part of an unauthorised ‘spring cleaning’.

The unknown perpetrators left a note on the door confessing to defacing it, saying they wanted to clean the bell of ‘the filth of the National Socialists’.

The note said they aimed to prevent a town ‘split’ after a heated debate.

The local parish council had recently decided the bell should still be used, after temporarily suspending its use, according to a BBC report.

The presence of remnants of the Nazi era, such as bells, continues to cause controversy in Germany.

The existence of the Schweringen bell only gained wider publicity after another town, Herxheim, had to deal with the controversy surrounding its so-called ‘Hitler bell’.

In February it was decided that bell would remain in the Herxheim church, to serve as a reminder of the country’s dark past.

The Schweringen incident took place at some point over Easter.

As well as the swastika, the perpetrators also ground away part of the 1934-era inscription.

The note explaining the motive was published in local newspaper Die Harke (The Rake).

“We did spring cleaning. Not only the village cleaned, but also the bell. Of pigeon dung, of the filth of the National Socialists, who still threatened after 80 years to divide the village population, and hopefully also of the dirt that might have been thrown off about Schweringen,” it said (in German).

“Schweringen is a village of clear, decent, intellectual, cosmopolitan citizens, and they will not simply stand by as the villagers are planning a split.”

“In this hope, and as Christians for freedom, we have freed this bell from the signs of a time of guilt and abuse,” the note concludes.

Community Pastor Jann-Axel Hellwege said the discussion about Schweringen’s bell had posed an ‘unprecedented challenge to the people in the church’.

He said the church was assessing whether the damage had affected the sound of the bell, and whether to take legal action.