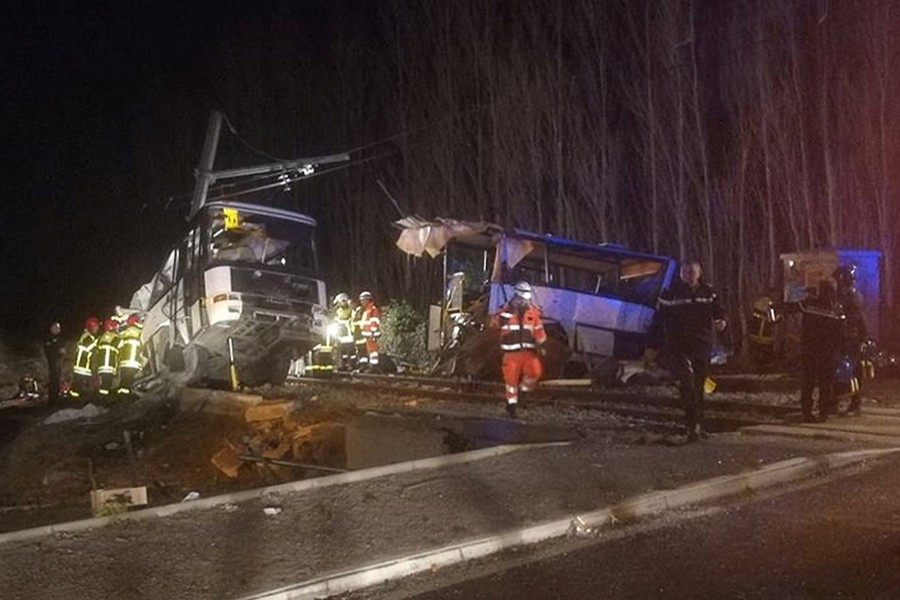 Rescue workers are seen on the site of collision between train and school bus in Millas, France on Thursday. - Reuters

Four adolescents were killed when a train smashed into a school bus on a level crossing outside the town of Perpignan in southwestern France on Thursday.

Images from the scene showed the bus split in two, with a long line of emergency vehicles on an approach to the crossing, according to a Reuters report.

Another 20 people were injured in the crash, 11 of them seriously, according to French Prime Minister Edouard Philippe, who travelled immediately to the scene. Most of the injured were schoolchildren aboard the bus, aged 13-17.

Philippe told reporters the authorities were focused on getting accurate information to families, a process “made difficult by the question of identification of those who have died and some of the injured.”

A crisis coordination centre has been set up at Millas town hall on Perpignan’s western outskirts, about 850 kilometres (530 miles) from Paris. According to local media reports, the bus was transporting pupils from the town’s Christian Bourquin college.

“All my thoughts (are with) the victims and their families,” French President Emmanuel Macron said on Twitter.

The causes of the crash are unknown, pending a full investigation, officials said. The bus and train drivers both survived and will be interviewed by police.

The train was carrying 25 passengers and travelling at 80 kmh, the regulatory speed for the section of track where the collision occurred, a spokeswoman for the national SNCF railway told Reuters news agency. Three train passengers sustained relatively minor injuries, according to the interior ministry.

Witnesses had reported that the barriers of the crossing were down at the moment of impact, the SNCF spokeswoman said, adding that all such preliminary information was “subject to confirmation” by investigators.

France has suffered several serious rail accidents in recent decades. One of the deadliest was in 1988, when a commuter train heading into Paris’ Gare de Lyon crashed into a stationary train, killing 56 people, after its brakes failed.