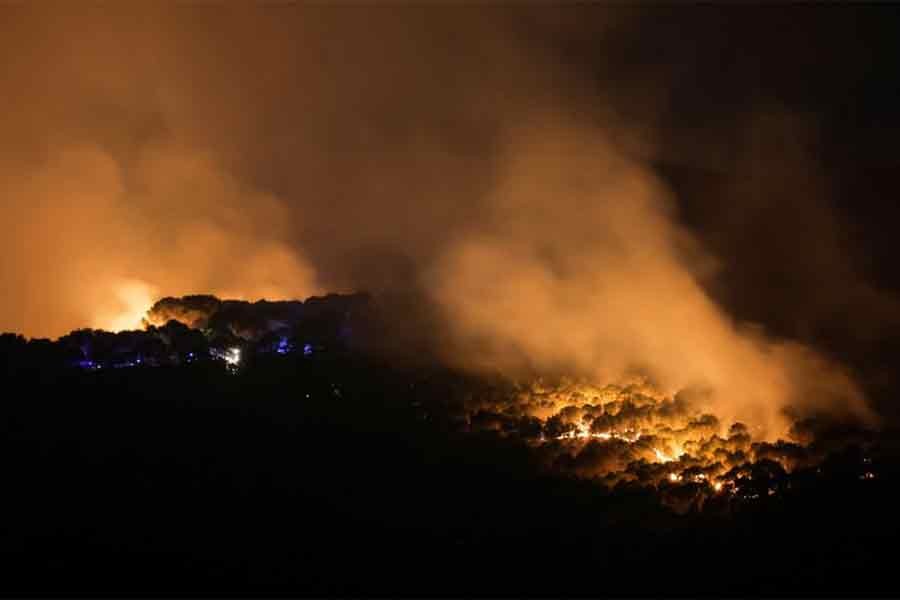 Authorities across southern Europe battled on Sunday to control huge wildfires in countries including Spain, Greece and France, where thousands of people have been evacuated in soaring temperatures.

In Spain, helicopters dropped water on the flames as searing heat and often mountainous terrain made the job harder for firefighters, reports Reuters.

National weather agency AEMET issued high temperature warnings for Sunday, with highs of 42 Celsius (108 Fahrenheit) forecast in Aragon, Navarra and La Rioja, in the north. It said the heatwave would end on Monday, but warned temperatures would remain "abnormally high".

Spain has been experiencing a nearly week-long heatwave, with highs of 45.7C (114F).

In Malaga province, wildfires raged into the night, affecting local residents near Mijas, a town popular with northern European tourists.

British pensioners William and Ellen McCurdy had to make a quick escape from their home on Saturday. They were taken to a local sports centre with other evacuated people.

"It was very fast .... I didn’t take it too seriously. I thought they had it under control and I was quite surprised when it seemed to be moving in our direction and then we were told to go. So we have left a lot of stuff behind," William, 68, said.

"We just grabbed a few essentials and just ran and by that stage everybody along the street was on the move," Ellen said.

Mari Carmen Molina, a local councillor in Alhaurin, one of the evacuated towns, said she was worried homes could be destroyed.

In France, wildfires had now spread over 11,000 hectares (27,000 acres) in the southwestern region of Gironde, and more than 14,000 people have been evacuated, the regional authorities said on Sunday afternoon.

More than 1,200 firefighters were trying to control the blazes, the authorities said in a statement.

In Portugal, firefighters were trying to control five forest and rural fires in the centre and north of the country, the largest near the northern city of Chaves.

Portugal's Health Ministry said late on Saturday that in the last seven days 659 people died due to the heatwave, most of them elderly. It said the weekly peak of 440 deaths was on Thursday, when temperatures exceeded 40C (104F) in several regions and 47C (117F) at a meteorological station in the district of Vizeu in the centre of the country.

The country is grappling with extreme drought - mainland Portugal already had 96% of its territory in severe or extreme drought at the end of June, before the recent heatwave, according to data from the national meteorological institute IPMA.

In Greece, the fire brigade said on Saturday 71 blazes broke out within 24 hours. On Sunday, more than 150 firefighters were tackling a fire burning forest and farmland since Friday in Rethymno on the island of Crete. The flames were fuelled by strong winds. Local fire brigade officials said on Sunday it had been partially contained.

In Britain, the national weather forecaster has issued its first red "extreme heat" warning for parts of England on Monday and Tuesday, predicting temperatures could reach 40C (104F), topping the previous record of 38.7C (102F) in 2019.