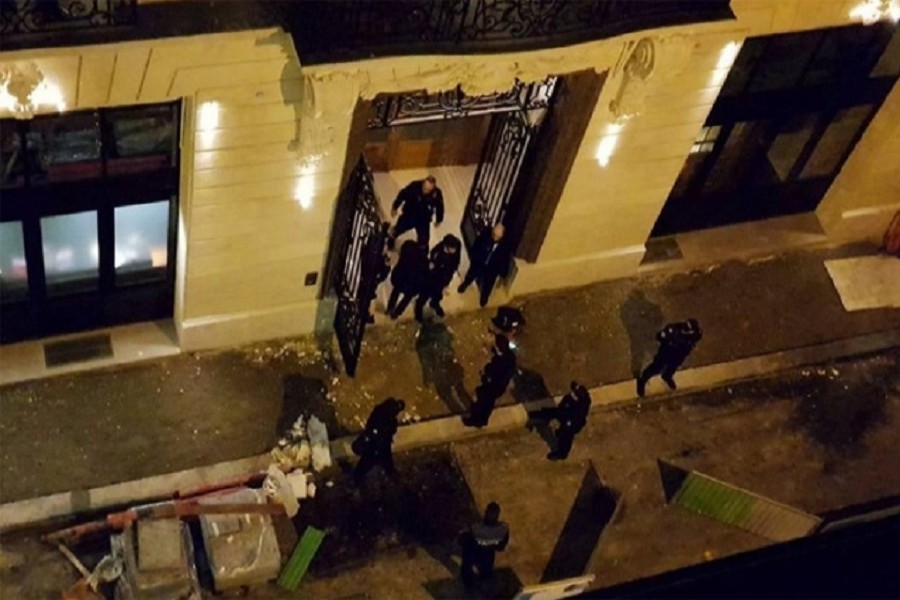 A general view of the scene after axe-wielding robbers stole jewellery on Wednesday from a store in the famed Ritz Paris hotel in Paris, January 10, 2018. Reuters

French police have recovered all the jewels that a gang of thieves attempted to snatch from a store in the upscale Paris Ritz hotel, a source close to the investigation said on Thursday.

Three axe-wielding thieves carried out the brazen robbery late on Wednesday at the ultra-chic hotel on the city centre's Place Vendome, next to the Justice Ministry.

But the three, all aged about 30, were arrested after being blocked in the building. Two accomplices waiting outside were thrown some booty and escaped by car and motorbike.

The motorcyclist, however, dropped one satchel of loot after hitting a pedestrian in a melee fleeing the scene.

"I can confirm that all the stolen jewels were found in the bag recovered by police officers," the source said.

The getaway car was found about 20 kms (12 miles) north of Paris in an area where the three arrested came from.

A figure of 4.5 million euros ($5.42 million), announced earlier, related to the total value of the jewellery in the display cases.

The hotel, now owned by Egyptian billionaire Mohammed al-Fayed, first opened in 1898 and was the first Paris hotel to boast electricity on all floors and bathrooms that were inside rooms.

It was at the Ritz that Diana, Princess of Wales, spent her last night in 1997 before the car crash that killed her and her lover Dodi Fayed, al-Fayed's son.

Armed heists targeting jewellery stores are not uncommon in the area, where dozens of luxury boutiques align the streets. Over the last few years police have kept a permanent presence in the area, but that has not deterred potential robbers.

In December, a man was able to substitute two diamonds and two rings worth 5.5 million euros in a jewellery store replacing them with fakes.

In October 2016, reality television celebrity Kim Kardashian was the victim of a robbery just 10 minutes walk from the Ritz, in which millions of dollars’ worth of jewellery was stolen from her.