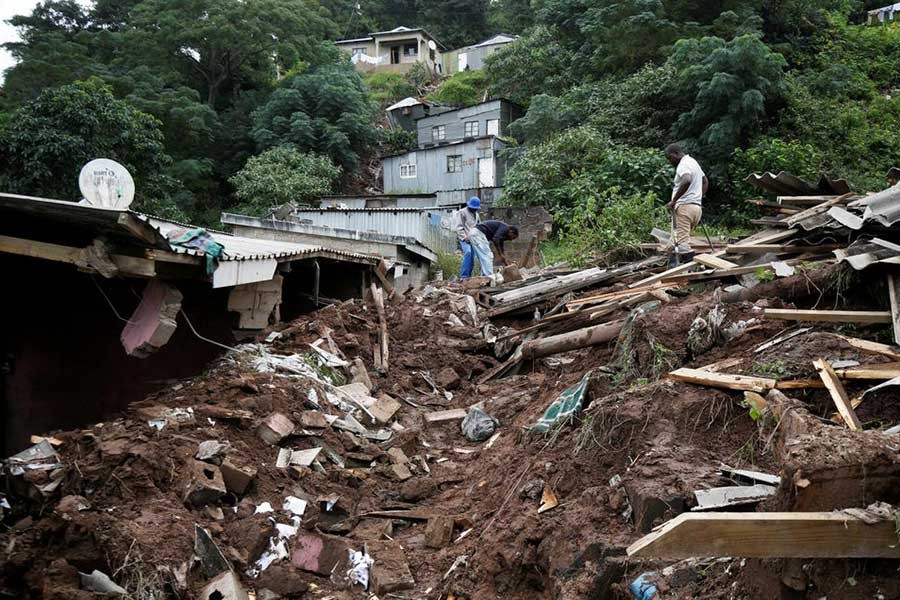 A devastating flood in South Africa's eastern coastal province earlier this week has left at least 341 people dead, the government said on Thursday, as rescuers continued to hunt for missing people amid forecasts of yet more rains from Friday.

"A total number of 40,723 people have been affected and sadly 341 fatalities have been reported," Sihle Zikalala, premier of the affected KwaZulu-Natal province, said in an online press conference, reports Reuters.

"We can confirm that the magnitude of the damage, which is still being quantified, will definitely run into billions of rand," he said, calling the floods an "unprecedented disaster in the history of our province and perhaps our country."

The province was declared a disaster area on Wednesday after incessant rains over the weekend and heavy downpour on Monday flooded homes, washed away roads and bridges, and disrupted shipping in one of Africa's busiest ports, with shipping containers washed away and in some areas looted.

"It is bad, it is bad. We don't have anything. I don't even have a bed," Somi Malizole, a resident of Isiphingo informal settlement, told Reuters as he inspected his corrugated iron shack where the contents had washed away.

Akhona Mfencane, another Isiphingo resident, who was seeking shelter at a community centre, said she fled her house after it was flooded and she was left with nothing.

As of Thursday, Mfencane was still waiting for help from the government.

"The place is always flooding, but this time around it was worse, we have never seen it like that before," said Mfencane.

On Thursday, residents in some areas scrambled to get clean water from broken pipes and water tanks after municipal services, including electricity, were impacted.

"We don't have water, we don't have electricity. It has been tough," said Thabisile Mathumbu, adding that communities were not given advance warning of heavy rains. "We should have been warned."

The government was still tallying the number of missing and displaced people, Zikalala, the premier, said.

The disaster has caused damage to 248 schools, and there are serious service delivery disruptions in water supply and electricity, although there are efforts to bring things back to normalcy, he said.

Africa's southeastern coast is on the front line of sea-borne weather systems that scientists believe are worsening because of global warming. They expect the situation to get far worse in the decades to come.

South African President Cyril Ramaphosa, who visited the province on Wednesday, described the disaster as "a catastrophe of enormous proportions," adding that it was "obviously part of climate change".

"We no longer can postpone what we need to do, the measures we need to take to deal with climate change. Our disaster management capability needs to be at a higher level," Ramaphosa told a crowd in Ntuzuma township in Durban, without elaborating.

The floods struck as the province recovers from days of arson and looting last year in which more than 300 people died. While therewas unrest in several parts of the country, KwaZulu-Natal was the hardest hit with several businesses disrupted.

Diversified property group Fortress REIT said that as of Wednesday, four of its logistics and industrial properties have been impacted, but there was no significant structural damage.

Retailer Truworths said that on Tuesday 37 of its stores were closed, but "things more or less returned to normal in our stores and with our manufacturers" the next day.

Mobile network operator MTN said on Wednesday it was able to bring back into operation over 278 sites, which include towers, in Umlazi and Amanzimtoti. But intermittent rain was making recovery challenging and has resulted in additional sites going down, it added.

But in a late evening statement, Transnet said it had resumed shipping from the port of Durban from Thursday afternoon and six export containers were being moved by rail to Durban.