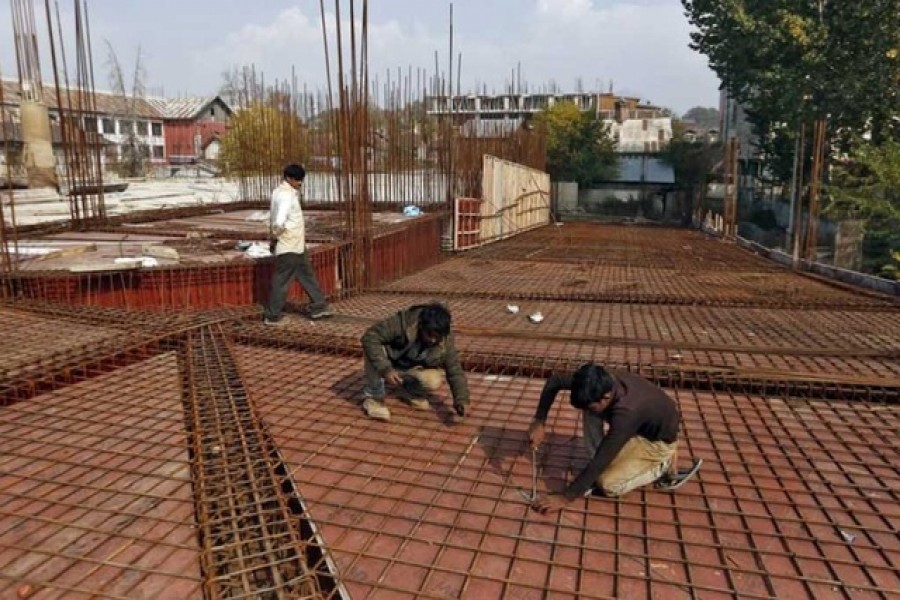 Migrant workers fasten iron rods together at the construction site of a parking lot in Srinagar Oct 30, 2019. REUTERS

Locals in the Kashmiri village where five Indian migrant labourers were killed by gunmen last week say they are living in fear of militant groups as well as the subsequent crackdown by security forces, reports Reuters.

The five migrants, from India's eastern state of West Bengal, were shot dead by militants in southern Kashmir's Kulgam district on Oct 29, police said, the latest casualties in a conflict that has claimed tens of thousands of lives over the last three decades.

A sixth migrant, who survived the attack and is recovering in hospital in Kashmir's capital Srinagar, told Reuters that the assailants were men who barged into a rented room he and the five other migrants had been living in, above a shop in the Katrasoo village of Kulgam.

Tensions in Muslim-majority Kashmir, claimed by India and Pakistan, have been especially elevated since New Delhi stripped its portion on the region of autonomy and statehood on August 5.

Indian authorities restricted communications to the region and arrested thousands of people in a bid to prevent unrest. Some have since been released.

Indian police say militant groups have targeted migrant labourers, a new tactic aimed at driving away the thousands of non-Kashmiris who work in its orchards, paddy fields and construction sites.

Including the most recent attack, at least 11 people from outside Kashmir have been killed in recent weeks, and many of the thousands of migrant labourers who come to the valley to work each year have fled.

But interviews with a dozen villagers said they also feared a heavy-handed response from security services investigating the killings.

"It's only the forces or militants who have guns here," said Ghulam Nabi, an elderly man who owns a meat shop on the street where the men were shot.

"Us civilians are not the ones carrying guns, but we are still suffering."

The lone survivor, Zahoor Din, lying covered with a green sheet on a hospital bed, said he and the other migrant labourers had been preparing to have dinner on Tuesday evening when the gunmen came in and took them outside.

They were wearing cloaks concealing their weapons, said Din, speaking slowly and with effort, as he readjusted his heavily bandaged arm.

"It was dark and I couldn't see very well. But we were scared, so we went along with them downstairs," he added.

The gunmen made the migrants walk a few hundred meters across the road toward a bakery shop, and then fired multiple shots at them in the dark, Din said. Their bodies fell on the dirt track.

Din was shot in four places, including on his arm and legs, and some villagers helped him up upon hearing his cries for help. He did not recognise the assailants, he added.

Dilbag Singh, the director general of police for the Jammu and Kashmir territory, told reporters after the killings that the militants involved had been identified and would soon be "neutralised." He did not elaborate.

The killings in Katrasoo have been followed by a crackdown by the army and police that locals say has spooked them.

Army officers arrived shortly after the killings and rounded up the shopkeepers and residents living near the site, said Nayeema Khatun, a resident.

More than a dozen people have been detained by security forces since the killings, villagers said, adding that some had also been released.

Despite attacks that police have blamed militant groups for, many people in Kashmir support them, and strongly resent Indian rule. In turn, Indian security forces suspect people of assisting militant groups, many of which are based in neighbouring Pakistan.