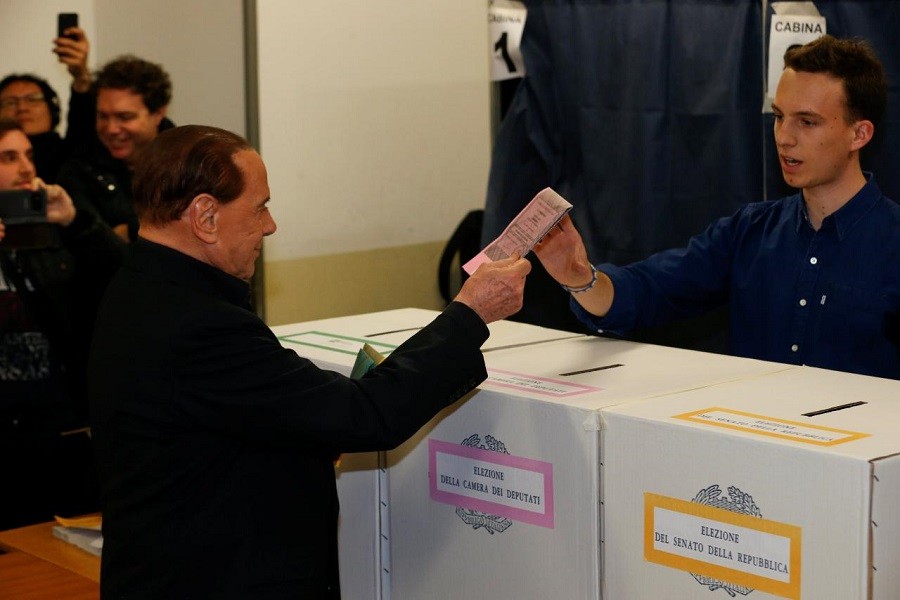 Italy is on course for a hung parliament after voters backed right-leaning and populist parties, exit polls suggest.

Initial projections say ex-PM Silvio Berlusconi's centre-right coalition is set to win the most seats in the lower house of parliament.

Forming a government may now take weeks of negotiation and coalition-building.

Exit polls put the anti-establishment Five Star Movement in second place. It has made significant gains and could emerge as the largest single party, with about 30 per cent of votes and 195-235 seats.

The country's ruling centre-left Democratic Party stands in third place with a projected 115-155 seats - its prospects battered by public anger over unemployment and immigration.

BBC Europe editor Katya Adler tweeted that it is "theoretically possible for the EU's nightmare result to come true: a coalition between the 'populist Eurosceptics': Five Star and Lega [the League party]".

The surge in support for populist parties has prompted comparisons to Brexit and the election of Donald Trump in the US.

"The European Union is going to have a bad night," tweeted Marine Le Pen, leader of France's far-right National Front.

Figures based on early vote counting suggest Five Star and the League have also done better than expected in voting for Italy's Senate, the upper house of parliament.

Mr Berlusconi, 81, cannot hold public office himself until next year due to a tax fraud conviction.

The four-time prime minister - who has allied himself with the anti-immigrant League party - has backed European Parliament President Antonio Tajani as his choice to lead the country.

Matteo Renzi's Democratic Party has partnered with three smaller parties to form a centre-left, pro-EU bloc that has staked its campaign on proposals to revive the economy. Mr Renzi resigned as PM in December 2016.

Long queues were seen at voting centres around the country, with residents in Rome asked to turn up well before polls closed at 23:00 (22:00 GMT) to make sure they had time to cast their ballots.

The delays are thought to have been caused by a new voting system and new in-depth, anti-fraud checks.

In Palermo, Sicily, 200,000 ballots had to be reprinted because of errors, which led to a delay in some polls opening.

More than 600,000 migrants have made the treacherous journey from Libya across the Mediterranean to reach Italy since 2013.

The huge number of arrivals has upset many Italians - with politicians, including from the mainstream, toughening their rhetoric as a result.

Mr Berlusconi has called the presence of illegal migrants a "social time-bomb" and pledges mass deportations.

The campaign has seen violent clashes between far-right supporters and anti-fascist protesters.

Italy's economy has started to expand once again. But nearly 10 years on from the global financial crisis, Italy's gross domestic product - or total economic output - remains 5.7 per cent lower than pre-crisis levels.

Economic policy has been a key battleground, but observers say they have heard more from parties about pensioners than youths, which could be due to young voters' high vote abstention rates.

Italy is the EU's fourth-largest economy and the gains by populist and far-right parties are a major concern in some European capitals and in Brussels.

Contenders have lined up to blame EU budget rules for hampering economic recovery. Five Star and the League had promised to hold a referendum to leave the euro but dropped that rhetoric.