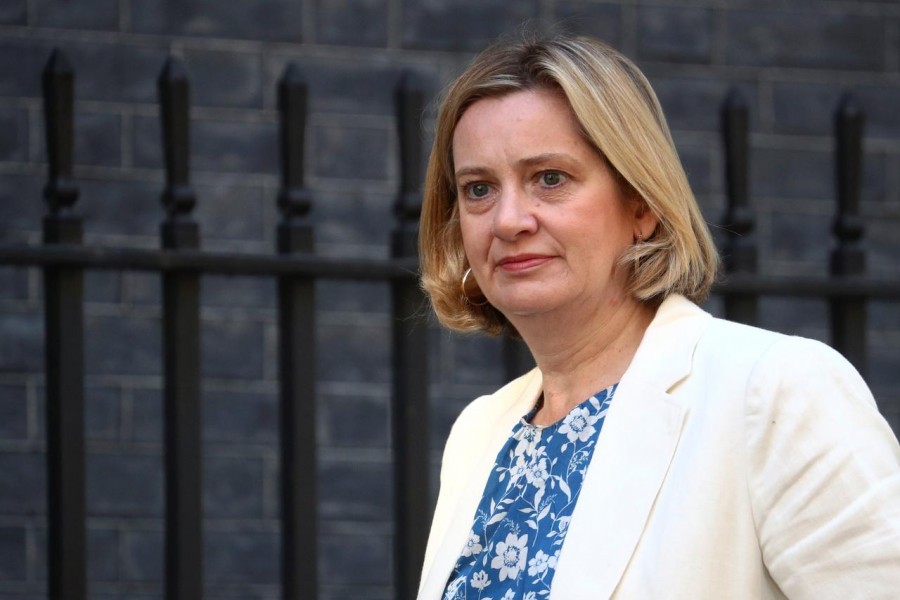 Britain’s Work and Pensions Secretary Amber Rudd resigned from the government and the ruling Conservative Party on Saturday in a protest over Prime Minister Boris Johnson’s handling of the country’s departure from the European Union.

Johnson says he wants to take Britain out of the EU on Oct 31 with or without a deal with the bloc. But he lost his parliamentary majority this week and expelled 21 lawmakers from his Conservative Party’s group in parliament after they supported an opposition plan to try to block a no-deal exit.

Rudd, also a former interior minister who voted remain in the 2016 Brexit referendum, said the ousting of the rebel lawmakers, who included the grandson of Britain’s wartime leader Winston Churchill and two former finance ministers, was an “assault on decency and democracy.”

“I cannot stand by as good, loyal moderate Conservatives are expelled. I have spoken to the PM and my association chairman to explain,” she said.

Brexit remains up in the air more than three years after Britons voted to leave the EU, Reuters reported.

Options range from a turbulent no-deal exit to abandoning the whole endeavor.

In her resignation letter to Johnson, who succeeded Theresa May as prime minister in July, Rudd said: “I joined your cabinet in good faith: Accepting that ‘no deal’ had to be on the table, because it was the means by which we would have the best chance of achieving a new deal to leave on 31 October.

“However I no longer believe leaving with a deal is the government’s main objective.”

The Sunday Times reported that at least six cabinet members share Rudd’s views, with at least one also considering resigning.

Rudd’s resignation caps a tumultuous week for Johnson that has also seen his own brother Jo quit the government, saying he was “torn between family loyalty and the national interest.”

“The prime minister has run out of authority in record time and his Brexit plan has been exposed as a sham,” said Ian Lavery, chair of the main opposition Labour Party.

“No one trusts Boris Johnson. Not his Cabinet, not his MPs, not even his own brother.”

Johnson says the only solution to the Brexit impasse is a new election, which he wants to take place on Oct 15, allowing him to win a new mandate with two weeks left to leave the bloc on time. He needs two-thirds of parliament’s lawmakers to back an early election.

But opposition parties, including Labour, said they would either vote against or abstain on calls for an election until a law to force Johnson to seek a Brexit delay is implemented.

On Saturday it emerged lawmakers are preparing legal action as they believe Johnson could try to defy the legislation compelling him to seek a further delay to Brexit.

The Sunday Telegraph reported that Dominic Cummings, Johnson’s top aide, is creating a shadow team of advisors to work on plans to fight an expected emergency judicial review in Britain’s highest court, the supreme court, next month if Johnson is unable to secure an election next week.

An opinion poll on election voting intentions carried out by YouGov for the Sunday Times put the Conservatives on 35 per cent, Labour on 21per cent, the pro-remain Liberal Democrats on 19 per cent and the Brexit Party on 12 per cent.

‘What planet are they on?’ No respite for UK's Johnson and aide