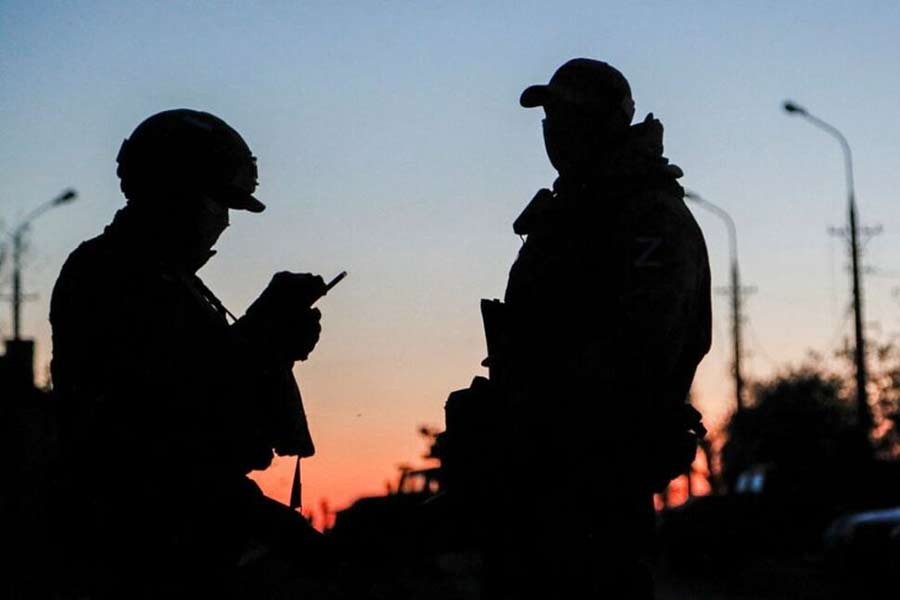 The war between Russia and Ukraine heads into the fourth month on Tuesday with no end in sight to the fighting that has killed thousands, uprooted millions and reduced cities to rubble.

After abandoning its assault on the capital, Kyiv, Russia is pressing on in the east and south in the face of mounting sanctions and a fierce Ukrainian counter-offensive bolstered by Western arms, according to Reuters.

Some key events in the conflict so far:

Russian President Vladimir Putin says he is launching a "special military operation" to demilitarise and "denazify" Ukraine. Ukrainian President Volodymyr Zelensky tweets: "Russia has embarked on a path of evil, but Ukraine is defending itself."

⦿ March 1: A US official says a miles-long Russian armoured column bearing down on Kyiv is bogged down by logistical problems.

Russia hits a TV tower in Kyiv and intensifies its long-distance bombardment of Kharkiv in the northeast and other cities, in what is seen as a shift in Moscow's tactics as its hopes of a quick charge on the capital fade.

⦿ March 2: Russian forces start a siege of the southeastern port of Mariupol, seen as vital to Russian attempts to link the eastern Donbas region with Crimea, the Black Sea peninsula Moscow seized in 2014.

⦿ March 13: Russia extends its war deep into western Ukraine, firing missiles at a base in Yavoriv near the border with NATO member Poland.

⦿ March 16: Ukraine accuses Russia of bombing a Mariupol theatre where hundreds of civilians are sheltering. Moscow denies it.

⦿ March 25: Moscow signals it is scaling back its ambitions and will focus on making gains in the east, and Ukrainian forces go on the offensive to recapture towns outside Kyiv.

⦿ April 3/4: Ukraine accuses Russia of war crimes after a mass grave and bodies of people shot at close range are found in the recaptured town of Bucha. The Kremlin denies responsibility and says images of bodies were staged.

⦿ April 8: Ukraine blames Russia for a missile attack on a train station in Kramatorsk that killed at least 52 people trying to flee the looming eastern offensive. Russia denies responsibility.

⦿ April 14: Russia's lead warship in the Black Sea, the Moskva, sinks after what Ukraine says was a missile strike. Russia blames an ammunition explosion.

⦿ April 18: Russia launches its eastern assault, unleashing thousands of troops in what Ukraine describes as the Battle of Donbas, a campaign to seize two provinces and salvage a battlefield victory.

⦿ April 28: Russia fires two missiles into Kyiv during a visit by U.N. Secretary-General Antonio Guterres, Ukraine says. The Kremlin accuses Ukraine of attacking Russian regions near the border. Two blasts are heard in the Russian city of Belgorod.

⦿ May 1: About 100 Ukrainian civilians are evacuated from Mariupol's ruined Azovstal steelworks, in what the United Nations says is a "safe passage operation".

⦿ May 7: As many as 60 people are feared dead after a bomb strikes a village school in Bilohorivka, eastern Ukraine, the regional governor says.

⦿ May 9: Putin exhorts Russians to battle in a defiant Victory Day speech, but is silent about plans for any escalation in Ukraine.

⦿ May 10: Ukraine says its forces have recaptured villages from Russia north and northeast of Kharkiv, pressing a counter-offensive that could signal a shift in the war's momentum and jeopardise Russia's main advance.

⦿ May 12: More than 6 million people have fled Ukraine, the UNHCR says.

⦿ May 13: Video from Ukraine's military appears to show Ukrainian forces destroying parts of a Russian armoured column as it tries to cross the Siverskyi Donets river in the eastern Donbas region. Reuters cannot verify the footage.

⦿ May 14: Ukrainian forces have launched a counteroffensive near the eastern Russian-held town of Izium, the local governor says.

⦿ May 18: Finland and Sweden formally apply to join the NATO alliance, a move that would bring about the expansion of the Western military alliance that Putin aimed to prevent.

⦿ May 20: Ukrainian fighters holding out at Mariupol's Azovstal steelworks surrender to Russian forces over a period of several days. On May 20 Russia says the last Ukrainian forces have surrendered. Hours earlier, Zelenskiy said Ukraine's military had told the defenders they could get out and save their lives.