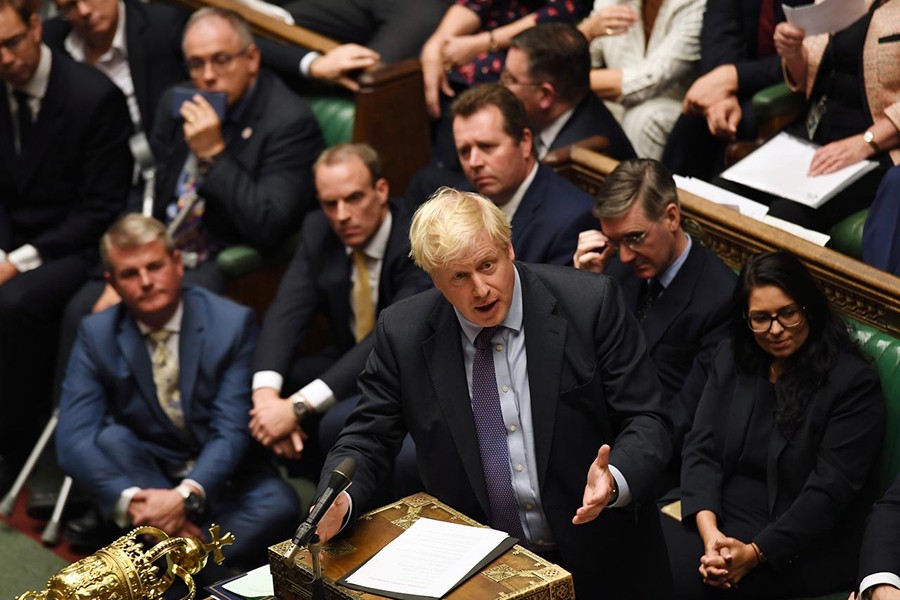 Britain's Prime Minister Boris Johnson is seen at the House of Commons in London, Britain on October 22, 2019 — UK Parliament/Jessica Taylor/Handout via REUTERS

The British PM will push for a general election if the EU proposes to delay Brexit until January, No 10 has indicated.

Boris Johnson "paused" his Brexit bill on Tuesday after MPs rejected his plan to get it signed off in three days.

Now EU leaders will consider whether to grant a delay to the 31 October Brexit deadline and what length it would be.

A letter Mr Johnson was forced by law to send to the bloc after failing to secure backing for his deal on Saturday calls for a three-month extension.

But a Downing Street source suggested the prime minister would not accept such a lengthy extension.

"On Saturday, Parliament asked for a delay until January and today Parliament blew its last chance," the source said.

"If Parliament's delay is agreed by Brussels, then the only way the country can move on is with an election. This Parliament is broken."

On Tuesday, MPs approved the prime minister's Withdrawal Agreement Bill on its first hurdle through the Commons - called the second reading - by 329 votes to 299.

But minutes later Mr Johnson was defeated - by a majority of 14 - in a second vote on a fast-tracked timetable for the bill, prompting him to pause his legislation.

The prime minister insisted to MPs it was still his policy that the UK should leave the EU on Halloween, but acknowledged he would have wait to hear what EU leaders said.

However, Leader of the Commons Jacob Rees-Mogg said it was "very hard to see how it is possible" for the bill to pass through the Commons and the Lords before 31 October, adding that Brexit was now in "purgatory".

Following the vote, EU Council President Donald Tusk said he would recommend European leaders backed an extension to the Brexit deadline, though he did not say what length it should be. He said he would "propose a written procedure", thus negating the need for another summit meeting.

The BBC's Europe editor Katya Adler said most of the people in EU circles she had spoken to were tempted to grant the extension to 31 January laid out in the so-called Benn Act - the law aimed at preventing no-deal.

Under that law, Mr Johnson wrote to the EU to ask for a three-month extension on Saturday, but did not sign the letter and said it was Parliament and not the government that had requested the delay.

However, BBC Brussels reporter Adam Fleming said an EU source had indicated the bloc was also considering a "flextension" - an extension with a maximum end date, but with the flexibility for the UK to leave early if a deal was ratified sooner.

Will the EU grant a new Brexit extension? If so, for how long?

The answer to these questions will most likely influence the next political events in the UK.

For example, if the EU refuses a new extension, MPs might well rush to approve the new Brexit deal, rather than face the possibility of no deal. The EU is hardly likely to run that risk though.

But if the bloc goes for a longer Brexit delay, then Boris Johnson will want to hold a general election (if parliament grants him one).

Nobel Prizes go ahead amid pandemic

US, China absent from global vaccine plan joined by 156 nations