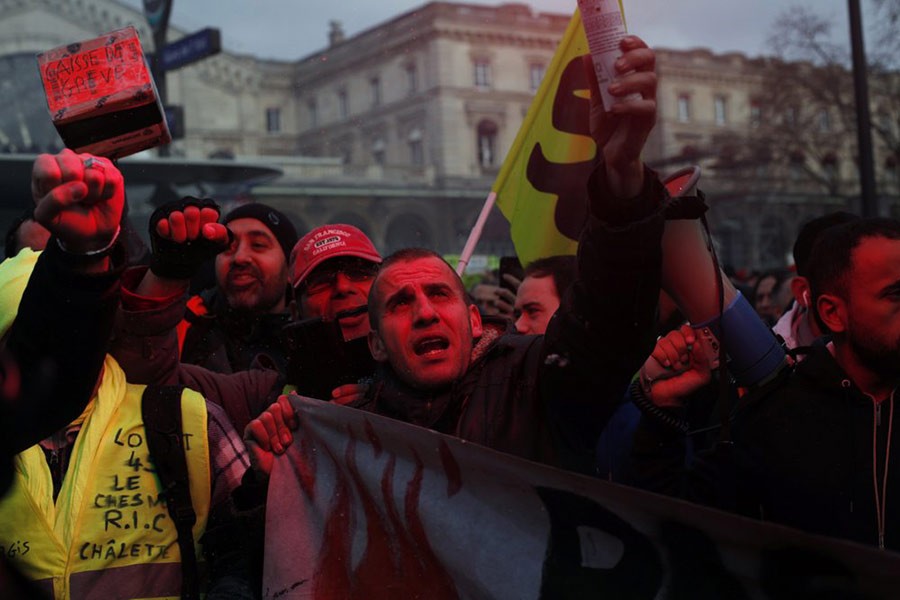 French union members and workers demonstrating in Paris on Thursday after 22 days on a strike against pension reform plans. -AP Photo

French union activists disrupted two of the country’s eight oil refineries Friday as part of nationwide strikes against a higher retirement age that have lasted for 23 days, the longest such walkout in France in decades.

The current action, at more than three weeks, is now longer than a 1995 transport workers strike that looms large in the nation’s modern history. The strike under Jacques Chirac’s presidency also was over pension reform and ended after 22 days w hen the government backed down.

This time, President Emmanuel Macron appears determined to push through the retirement overhaul and raise the official pension eligibility age to 64. But the government is holding negotiations with unions and offering compromise measures to airline pilots, forensic police and other groups.

The most determined unions are keeping up the pressure. Protests caused disruptions at oil refineries Friday in a region southeast of Paris and in the region that includes the major Mediterranean port of Marseille.

France’s interior minister insisted the disruptions would not cause gasoline shortages and urged drivers not to resort to panic buying.

The strike halted about half of the country’s high-speed trains on Friday, while tourists and Parisians squeezed into scarcer-than-usual buses and subway trains.

Unions called this year’s strike Dec. 5 against a pension reform plan they see as threatening the French welfare state. Macron argues the changes would make the pension system more fair and keep it out of debt.