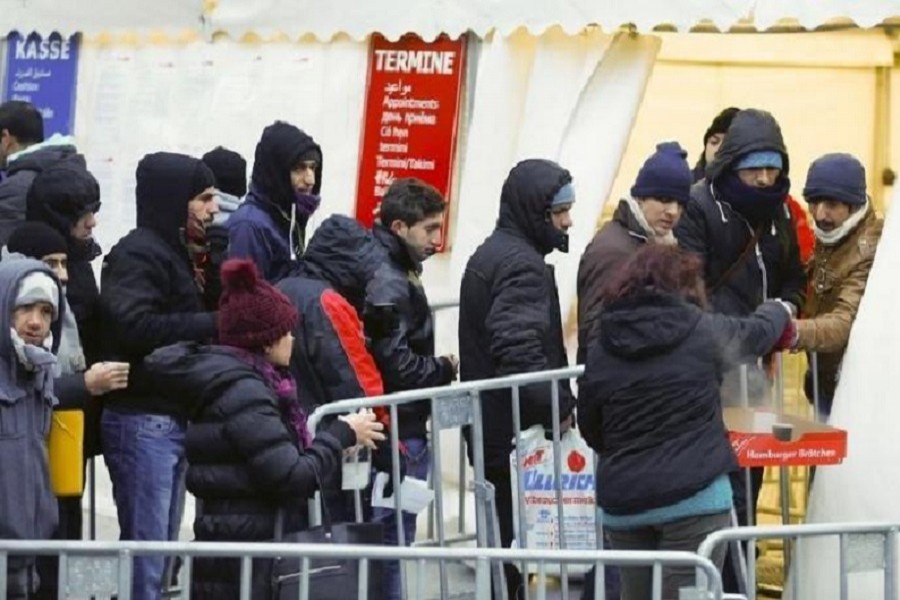 Migrants queue to enter a tent that serves as a waiting room at the the Berlin Office of Health and Social Affairs (LAGESO), in Berlin, Germany, January 5, 2016. Reuters

EU governments will study a new proposal aimed at overcoming the deep splits over sharing responsibility for asylum-seekers that has soured relations in the bloc since the migrant crisis of 2015, diplomats said on Wednesday.

Estonia, which holds the rotating presidency of the European Union, put forward the compromise plan at a meeting of national envoys, hoping to reconcile countries like Italy, which bear the brunt of arrivals from across the Mediterranean, and eastern states fiercely opposed to being obliged to take in immigrants.

Previous proposals have failed to make headway; governments which complain about unfair burdens stemming from an EU rule that asylum claims must be handled in the country where people enter the EU want others to be obliged to take in a share.

Ex-communist countries in the east, with little recent history of immigration, especially from Africa, Asia and the Middle East, have resisted attempts by the EU executive to force them to take quotas, leading to stalemate and division that, at the height of the crisis, threatened the Union’s cohesion.

Germany, where Chancellor Angela Merkel suffered in a September election for her decision to allow over a million people to enter during the crisis, has been pressing other countries to demonstrate “solidarity” on the migrant issue.

Under the Estonian plan, the executive European Commission would determine “fair shares” of asylum-seekers that countries would be expected to take in at their own borders -- largely based on their population and wealth. But it would trigger an “early warning” if arrivals looked about to test such levels.

In such circumstances, other member states would be asked to offer assistance in a range of ways, not simply taking in people but also offering material aid, personnel, funding and so on - something countries like Poland and Hungary have suggested they might offer as an alternative to accommodating migrants.

If crisis conditions persisted, such that a country was sheltering 150 percent or more of its fair share -- a number that would also take into account its previous record of taking in refugees -- then a more formal procedure could oblige other states by majority vote to make good on offers of “solidarity”.

The most sensitive part of that -- relocating asylum-seekers from one member state to another -- would, however, only take place if both states involved agreed voluntarily to the terms.

EU leaders agreed in October to avoid a repeat of clashes in 2015 when relocation quotas were forced through by majority vote, prompting legal challenges from some eastern states.. They have set a target of agreeing a consensual system by June.

Estonian officials said they believed the proposal offered a good balance between pushing states to show solidarity and those who argue that their societies cannot accept immigration, especially from Muslim countries. By offering a diverse range of ways to show solidarity, the proposal gets away from previous suggestions that states could just pay cash to keep people out.

One senior diplomat described the plan as “the mother of all compromises”, but it would still need political will to pass. That will only become clear in the months to come.