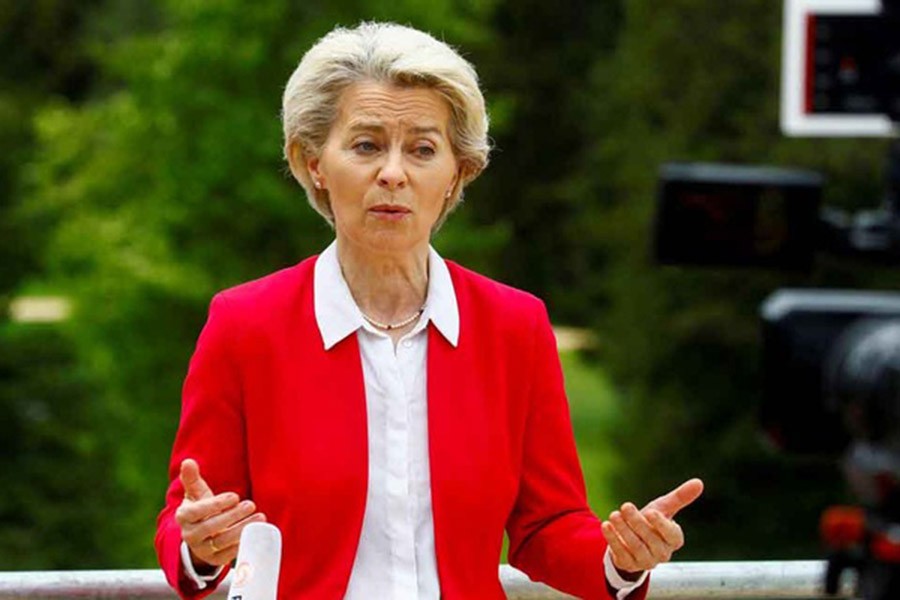 President of the European Commission Ursula von der Leyen gestures during an interview with Reuters in the Alpine resort of Davos, Switzerland May 24, 2022. REUTERS/Arnd Wiegmann

European Commission chief Ursula von der Leyen on Tuesday called for talks with Moscow on unlocking wheat exports that are trapped in Ukraine as a result of a Russian sea blockade.

US Secretary of State Antony Blinken last week accused Russia of using food as a weapon by holding "hostage" supplies for not just Ukrainians, but also millions of people around the world. Moscow rejects this allegation.

"The most important (thing) is to deblock the Black Sea. This is a call on Russia," von der Leyen told Reuters in an interview on the sidelines of the World Economic Forum.

Von der Leyen, who is president of the European Union's executive, said a food crisis was approaching at full speed and some sort of dialogue with Moscow was needed to unlock 20 million tons of wheat stuck in Ukraine.

"It cannot be in Russia's interest that, because of Russia, people are dying of hunger in the world," she said, adding that a solution to create food corridors needed to be found.

"I think we should first of all look at the dialogue with Russia, whether there is not an agreement that this wheat gets out of Ukraine", the European Commission head said.

Russia and Ukraine together account for nearly a third of global wheat supplies, while Ukraine is also a major exporter of corn, barley, sunflower oil and rapeseed oil, reports Reuters.

Meanwhile, Russia and Belarus, which have backed Moscow's "special military operation" in Ukraine, account for more than 40% of global exports of potash, a key crop nutrient.

Von der Leyen said the European Union should also step up its own production, making it easier for farmers to have a second crop or to increase wheat production.

Ukraine is top of the agenda at this year's gathering of more than 2,000 business and political leaders, NGOs and academics, with President Volodymyr Zelensky holding the de facto opening speech.

By contrast, no Russian companies or state institutions have been invited to the annual event in the Swiss Alpine resort.

With regard to the funding of Ukraine's reconstruction after the war, the EU is considering making use of frozen Russian central bank and oligarchs' funds, von der Leyen said.

"The basic feeling of fairness tells us we should look and we do look into that," she said.

The Baltic states have been calling for the confiscation of Russian assets, including central bank reserves of $300 billion, but it is unclear if this would be legal for the EU to do.

On May 3, Ukraine estimated the cost of reconstruction at $600 billion.

"It is not trivial but...the destruction of Ukraine was done by Russia's completely unjustified war, and therefore, if the whole world steps up to reconstruct Ukraine, Russia should also carry its fair share," she added.

Von der Leyen did not want to comment on what conditions would constitute a sufficient basis for Ukraine to accept an agreement about an end of the war.

"There is one important principle: It is Ukraine that defines and decides what they conceive as - this is for us the end of the war, this is acceptable. It is Ukraine, that decides on that," she said.