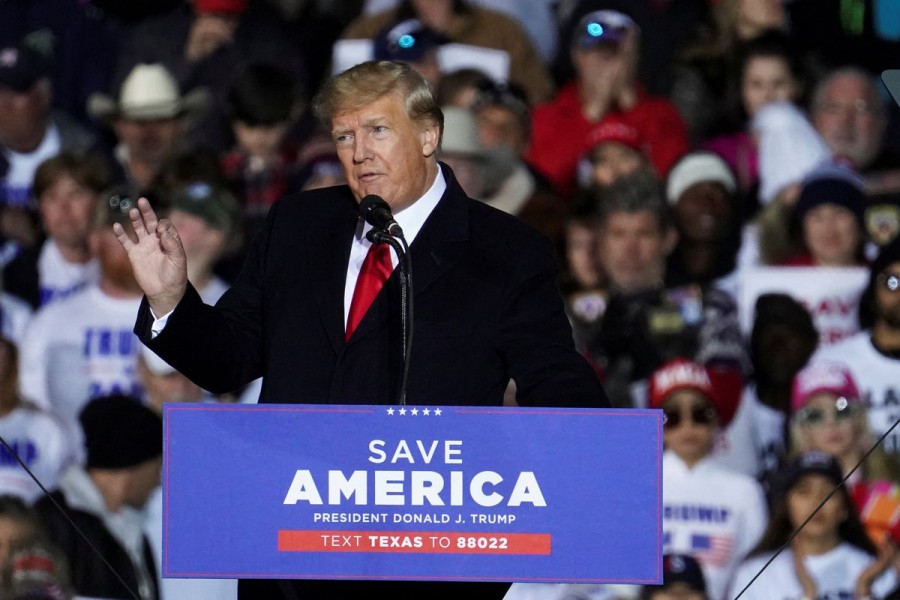 Former US President Donald Trump speaks during a rally, in Conroe, Texas, US, January 29, 2022 – Reuters/Go Nakamura

Then-President Donald Trump was directly involved in efforts to use national security agencies to seize voting machines after his 2020 election loss, pressing his lawyer to make queries as advisers drafted two versions of a related executive order, media reports said, according to Reuters.

The New York Times, citing three people familiar with the matter, reported on Monday that Trump directed Rudy Giuliani to call the Department of Homeland Security (DHS) to determine whether it could legally take control of voting machines in key swing states.

That effort came amid two previously reported attempts to seize the machines: Trump's outside advisers pressing to have the Defense Department confiscate them and Trump asking Attorney General Bill Barr whether the Justice Department could take them. Barr immediately rejected the suggestion, the Times said.

Trump's advisers drafted a second version of an executive order directing the DHS to take control of voting equipment, the Times and CNN reported. The first version, reported last month by Politico, called on the Defense Department to take the machines.

The New York Times outlined a direct attempt by Trump to push the effort, citing people who were briefed by those involved or who had firsthand knowledge.

Voting machines and most other aspects of US elections are overseen by state and local officials. Federal involvement in elections generally falls to the Justice Department, which addresses matters like civil rights issues or violence, and the Federal Election Commission, which enforces campaign finance law.

Representatives for Trump could not immediately be reached for comment on the reports.

The reports were the latest to highlight the outgoing Republican president and his advisers' efforts to overturn the 2020 election, which Democrat Joe Biden won by more than 7 million ballots and 306 to 232 votes in the Electoral College.

Trump continues to falsely state he lost the November 2020 election due to widespread fraud despite multiple court losses and audits confirming Biden's victory.

The reports come as a US House of Representatives committee investigating Trump supporters' deadly Jan. 6, 2021, attack on the U.S. Capitol is ramping up its efforts before public hearings expected this spring. Trump on Tuesday issued a statement again blasting the House probe.

Trump was impeached in the House but acquitted in the Senate on a charge of inciting the Capitol attack.

On Saturday, he told a rally in Texas that he would consider pardoning people convicted in the attack -- which left five dead and scores of police officers injured -- if he were to regain the White House in 2024.

More than 165 people have pleaded guilty to a variety of federal charges, out of more than 725 people arrested, according to the U.S. Attorney's Office for the District of Columbia.

Trump remains popular among Republicans. His main fundraising committee on Monday announced it had more than $100 million in cash, although donations have slowed. Some Republicans, however, have drawn the line at pardons for the attackers.

Separately, some documents that the National Archives has turned over to House investigators from the Trump White House had been taped together, according to CNN. The Archives, in a statement, confirmed that some records it received were "paper records that had been torn up by former President Trump."