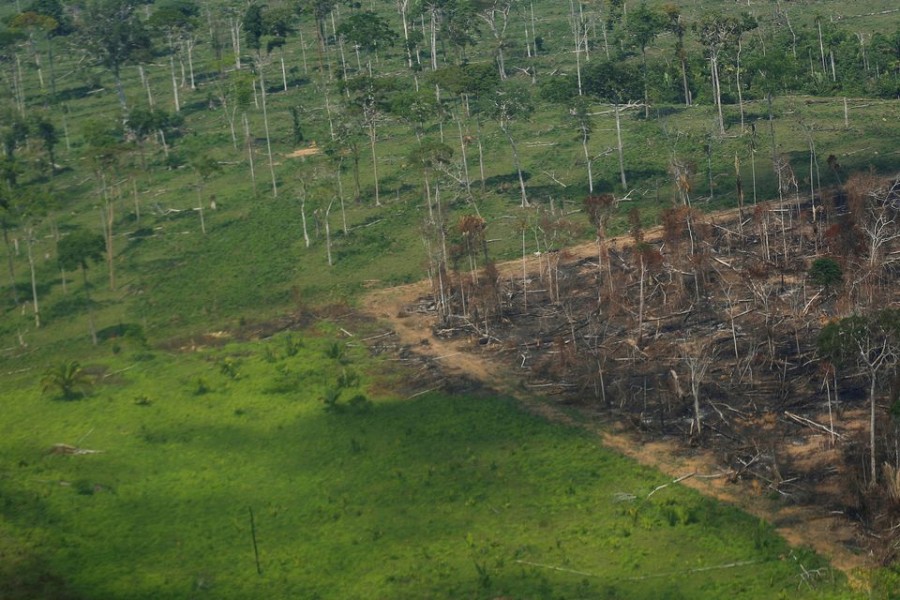 Brazil recorded the most deforestation ever in the Amazon rainforest for the month of January, according to government data on Friday, as destruction continues to worsen despite the government's recent pledges to bring it under control.

That's the highest for January since the current data series began in 2015/2016, equal to an area more than seven times the size of Manhattan, reports Reuters.

Environmental researchers said they were not surprised to see destruction still rising and pointed to right-wing President Jair Bolsonaro's weakening of environmental protections since he took office in 2019.

With little fear of punishment, speculators are increasingly clearing forest for ranches in illegal land grabs, said Britaldo Soares Filho, an environmental modelling researcher at the Federal University of Minas Gerais. High prices for beef, soy and other commodities are also boosting the demand for cheap land.

"People might be surprised that it didn't increase even more," Soares Filho said.

"There is a race to deforest the Amazon."

Bolsonaro's office did not respond to request for comment.

The Environment Ministry said that making comparisons using single months does not provide the best picture, stating that in August to January deforestation fell slightly compared to the same period a year ago.

The federal government is acting more forcefully in 2022 to fight against environmental crimes, the ministry said in a statement to Reuters.

The preservation of the Amazon, the world's largest rainforest, is vital to curbing climate change because of the vast amount of greenhouse gas absorbed in its trees.

Bolsonaro has long argued for more commercial farming and mining in the Amazon to help lift the region out of poverty.

Facing international pressure from the United States and Europe, Brazil last year pledged to end illegal deforestation by 2028 and signed a global pact to stop all forest destruction by 2030.

Soon after those commitments, Inpe released data showing that deforestation in 2021 in the Brazilian Amazon hit the highest point in 15 years. The preliminary data for January shows the destruction is continuing to mount.

Ana Karine Pereira, a political scientist at the University of Brasilia, said while Bolsonaro and his government changed their tone last year, their policies remain the same.

Soares Filho and Pereira said deforestation will only stop rising if Bolsonaro loses the presidential election in October.

"Changing the political profile of the president and federal government leadership is crucial in this moment to see a break in this trend of high levels of deforestation," Pereira said.

High deforestation is unusual in the current rainy season, when the rainforest is harder for loggers to access. The January data showed that new clearing was still less than half of what is common during the peak months from June to September.

A deforestation monitoring researcher at Inpe told Reuters the surge seen last month could be partially due to higher levels of cloud cover in November and December than the previous year.

Those clouds might have hidden destruction from satellites in those months that was subsequently revealed in January, said the person, who was not authorised to speak publicly.

Still, cloud cover remained relatively high in January, declining to 43 per cent from 54 per cent in December.