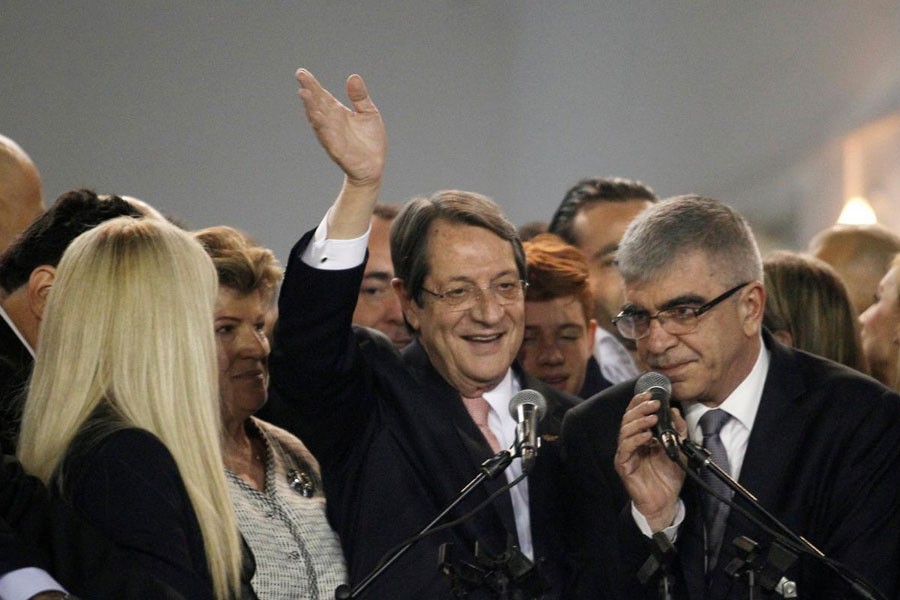 Newly elected president Nicos Anastasiades greets his supporters during a proclamation ceremony after the second round of the presidential election, at Eleftheria Hall in Nicosia, Cyprus, February 4, 2018. (REUTERS)

Cyprus President Nicos Anastasiades vowed to push on with attempts to reunify the ethnically divided island nation and to improve the economic fortunes of its people after he was re-elected by a wide margin.

The incumbent president received 56 percent of the vote, compared to 44 percent for Malas, in the final returns, reports the Associated Press.

Malas telephoned Anastasiades to concede defeat about an hour after polls closed, when half of the ballots had been counted and Malas trailed badly.

Speaking to supporters, Malas said he told Anastasiades to "take care of our Cyprus."

It's the second consecutive time that Anastasiades, 71, a conservative veteran politician, won a head-to-head contest with Malas, 50, for the presidency.

Malas campaigned as the candidate who would bring change to a tired political system that short-changes ordinary Cypriots, who have seen salaries and benefits slashed in the wake of the national economy's near-meltdown.

But voters appeared to heed the incumbent's campaign message, which blamed the left-wing economic policies of previous administrations for bringing Cyprus close to bankruptcy.

Malas also struggled to separate himself from the party that supported him, the communist-rooted AKEL. Anastasiades accused AKEL of crushing the economy during the presidency of former leader Demetris Christofias.

Cyprus was split into an internationally recognised Greek Cypriot south and a breakaway Turkish Cypriot north in 1974 when Turkey invaded after a coup by supporters of union with Greece.

Only Turkey recognises a Turkish Cypriot declaration of independence and keeps more than 35,000 troops in the north.

Voters remain sceptical about whether a reunification deal can be reached any time soon. The latest round of talks at a Swiss resort in July collapsed amid finger-pointing about who was responsible for the failure.

To buoy public hopes, Anastasiades said he would reach out to Turkish Cypriot leader Mustafa Akinci to try and resuscitate their negotiations.

Anastasiades repeated that he would seek a peace deal that doesn't include Turkey's demands for a permanent troop presence and the right to intervene militarily in a federated Cyprus.

One of the president's first orders of business will be to oversee ongoing exploratory drilling for gas off the island's southern coast - an enterprise that could help the economy but also complicate efforts to heal Cyprus' ethnic divide.

Election results showed that 74 percent of eligible voters cast ballots Sunday, slightly more than the first round of voting last week, but 7 percent less than in the 2013 election.

Anastasiades has said a second term would be his last.