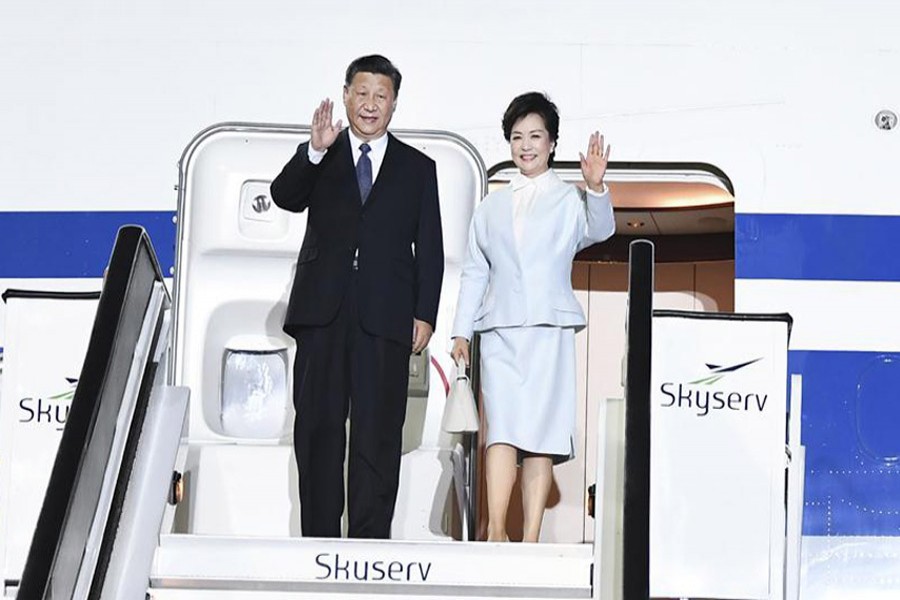 Chinese President Xi Jinping and his wife Peng Liyuan disembark from the airplane upon their arrival at the airport in Athens, Greece, November 10, 2019. Photo: Xinhua

It is the first visit by a Chinese head of state to the European nation in 11 years.

Xi and his wife, Peng Liyuan, were greeted by senior Greek officials at the airport.

Upon arrival, Xi said Greece boasts long history and glorious culture and has made outstanding contributions to the progress of human civilizations.

China and Greece shine for each other in their cultures, and they also enjoy a long history of friendly exchanges, Xi said.

As countries with ancient civilizations, both China and Greece support exchanges and dialogue between different civilizations and promote their harmonious co-existence, he said.

Xi pointed out that China and Greece have maintained a high level of development in their relations over recent years, as witnessed by frequent high-level exchanges, constant deepening of political mutual trust, and fruitful cooperation results under the Belt and Road Initiative that is marked by the Piraeus Port project, Xinhua reports.

The two countries have also kept close communication and coordination on major international and regional issues, contributing to world peace, stability, development and prosperity, he said.

Currently, Xi said, both China and Greece are at a critical stage of their respective development, and it is in the fundamental interests of the two countries and their people to deepen bilateral relations and expand practical cooperation.

He said he looks forward to having in-depth exchange of views with President Prokopis Pavlopoulos and Prime Minister Kyriakos Mitsotakis on developing bilateral relations under the new situation, so as to jointly map out the blueprint for future cooperation between the two countries and open a new chapter in their comprehensive strategic partnership.

Greece is the first stop of Xi's ongoing Europe and Latin America tour, which will also take him to Brazil. He will attend the 11th BRICS summit to be held in Brasilia on November 13-14.