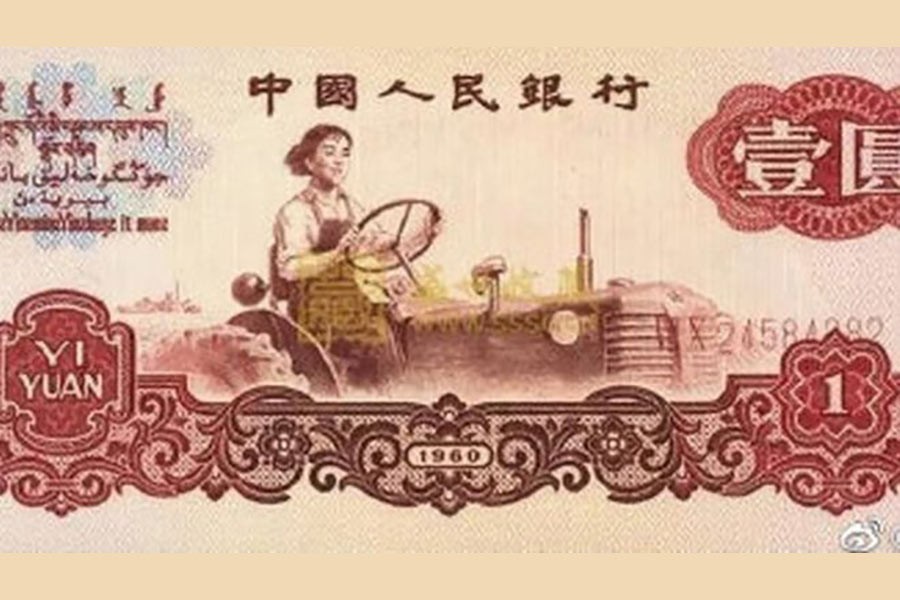 A woman who became China's first female tractor driver, and eventually a national icon, has died at the age of 90.

In 1948, Liang Jun became the only female in China to take up the job, when she enrolled in a training class for tractor drivers.

More than a decade later, an image of her proudly driving a tractor was featured on China's one-yuan banknote.

"No-one could drive as well as me," she had said in an earlier interview. "I have no regrets in this life."

Liang Jun was born in 1930 to a poor family in China's remote Heilongjiang province.

She spent most of her early years helping out at a farm as well as studying in a rural school.

In 1948, when a local school opened up a course to train tractor drivers, she seized her chance.

According to local media, there were 70 students in the class - with Liang Jun being the only female. She eventually completed her training and became the country's first female tractor driver.

A year later, communist leader Mao Zedong announced the creation of the People's Republic of China.

Liang Jun joined the Chinese Communist Party (CCP) as a member and was later sent to a school in Beijing to learn more about agricultural machinery.

She returned to Heilongjiang upon finishing her studies and was posted to work in the Agricultural Machinery Research Institute.

In 1962, China began printing banknotes that featured an image of her driving a tractor.

The communist party had prioritised the mobilising of women - especially those in the countryside - in the country's growing labour force.

Featuring women in various occupations was a way of promoting this, with "no occupation more promoted than that of the female tractor driver", according to the Oxford Handbook of the History of Communism.

As China pushed Liang Jun into the limelight, her story was also printed in textbooks and is said to have inspired dozens of other women to become tractor drivers.

In 1990, she retired from her position as chief engineer of the Harbin municipal bureau of agricultural machines - marking the end of several decades in the industry.

She often shifted in and out of consciousness, and was eventually confined to her bed, said media reports.

Her son, Wang Yanbing, said she had passed away "peacefully" on Monday.

"She had put up a good fight," he told a Harbin news outlet. "She was always happiest when people talked about her as China's first female tractor driver."

On social media website Weibo, tributes flowed in for Liang Jun, after her death became the top trend.

"She showed that whatever men can do, women could do as well," said one commenter.

"Goodbye to this woman who held up half the sky," said another comment, referencing a famous phrase by Mao Zedong.

"She worked hard and became the heroine of her generation," another said. "Goodbye Liang Jun. We salute you."