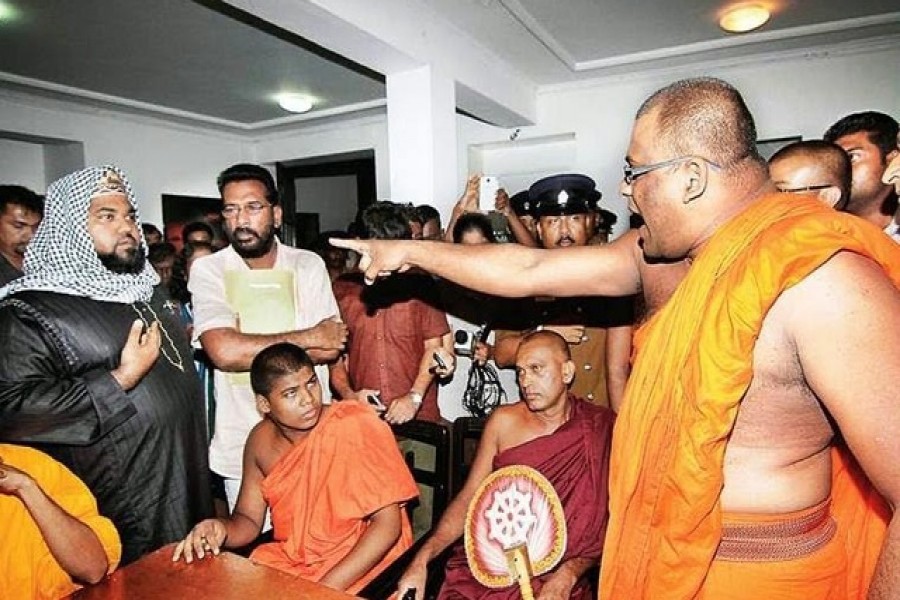 Sri Lankan police arrested 19 people after a clash between "extremists" from the majority Buddhist and minority Muslim communities in which four people were injured, a spokesman said on Saturday.

Tension has been growing between the two communities this year, with some hardline Buddhist groups accusing Muslims of forcing people to convert to Islam and vandalising Buddhist archaeological sites.

Some Buddhists nationalists have also protested against the presence in Sri Lanka of asylum seekers from mostly Buddhist Myanmar's persecuted Rohingya Muslim minority.

Police said the late Friday violence in the southern coastal town of Ginthota was triggered by rumours and fake messages on social media.

"This was a clash between a small fraction of extremists in the both ethnic groups," police spokesman Ruwan Gunasekera told Reuters.

One of those arrested was a woman who falsely spread news that Muslims were about to attack a Buddhist temple, he said.

"We've decided to arrest those who have been spreading false messages and rumours on social media."

Later police said all 19 suspects have been remanded until Nov. 30 and a local curfew had been imposed in the clash area for 12 hours to 0600 hours (0300 GMT) on Sunday.

Law and Order Minister Sagala Ratnayaka said "some political groups are now on a desperate mission to turn this minor brawl into a Sinhala-Muslim clash".

"I urge the public not to be misled by their false propaganda," he said.

Additional police battalions, elite police forces, the anti-riot squad and the military were called late on Friday to bring the situation under control.

Buddhists make up about 70 percent of Sri Lanka’s population of 21 million, compared with about 9 percent for Muslims.

President Maithripala Sirisena’s government, after coming under fire from rights groups and diplomats for not doing enough to crack down on hardline Buddhist groups, acted against anti-Muslim attackers in June this year.

That response came after more than 20 attacks on Muslims, including arson at Muslim-owned businesses and petrol-bomb attacks on mosques, were recorded in two months.

In 2014, three Muslims were killed in riots stirred up by hardline Buddhist groups.