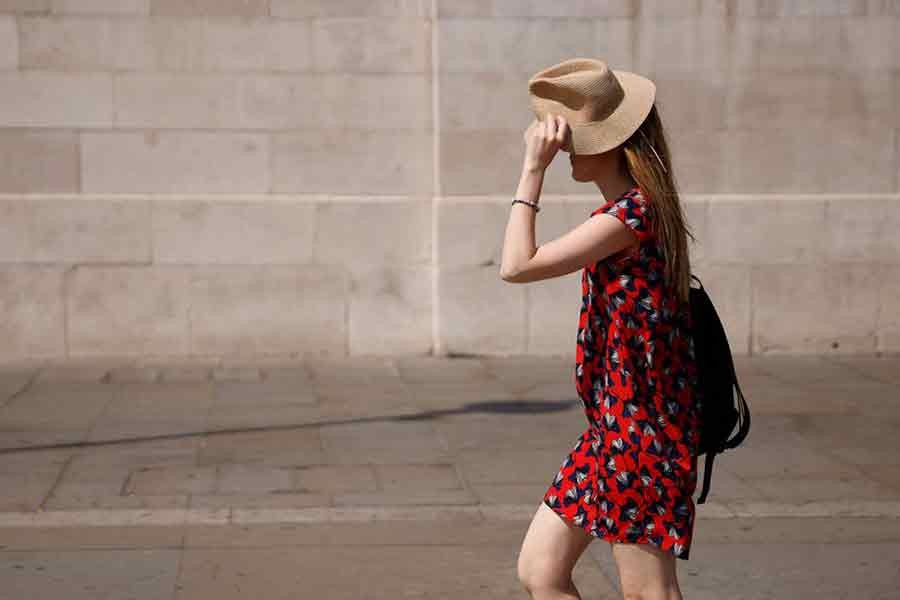 Britain recorded its highest ever temperature of 40C (104F) on Tuesday as a heatwave gripping Europe intensified, scorching fields and damaging airport runways and train tracks.

The Met Office said the provisional record, which still needs to be confirmed, was recorded at 12.50 pm (1150 GMT) at London's Heathrow Airport, surpassing the previous record of 38.7C recorded in 2019, reports Reuters.

Train routes were cancelled, normally busy city centres appeared quiet and zoos struggled to keep their animals cool. At Farnborough, the world's joint-biggest air show, executives sheltered from the sun while in one hall without air conditioning some attendees sprayed each other with mist.

In shops, ice creams and cold drinks were selling out while fans, hoses and air conditioning units were in demand. Such was the heat that Lord's cricket ground said members no longer needed to wear a jacket, a day after the House of Commons said the same.

Britain, which can struggle to maintain key transport services in extreme heat or the snow, has been put on a state of national emergency over the unprecedented temperatures.

Transport minister Grant Shapps said it would be many years before Britain could fully upgrade its infrastructure to cope with higher temperatures, after at least two runways showed signs of damage and some train tracks buckled.

"We've seen a considerable amount of travel disruption," he told the BBC. "Infrastructure, much of which was built from the Victorian times, just wasn't built to withstand this type of temperature."

Climate scientists said the once-unthinkable temperature in London was likely to become more common in the coming years.

Sony Kapoor, a climate and macro-economic professor at European University Institute, said he had long thought that people underestimated the physical impacts of climate change in contemporary times. "But even I never thought we would see 40 degree Celsius in London in 2022," he said.

The arrival of a searing heatwave that first sparked wildfires across Europe before arriving in Britain has turned the spotlight on to "net zero" pledges made by the candidates running to replace Boris Johnson as prime minister.

After Johnson championed the move to net zero status when Britain held the United Nations COP26 summit in 2021, some of the candidates to replace him have appeared more lukewarm and rated other challenges facing the country as their priority.

One candidate, Kemi Badenoch, said she believed in cutting carbon emissions but not in bankrupting the economy to do so.

Stephen Belcher at the Met Office said he had not expected to see 40C in Britain in his career.

"Research conducted here at the Met Office has demonstrated that it's virtually impossible for the UK to experience 40C in an undisrupted climate but climate change driven by greenhouse gases has made these extreme temperatures possible," he said.