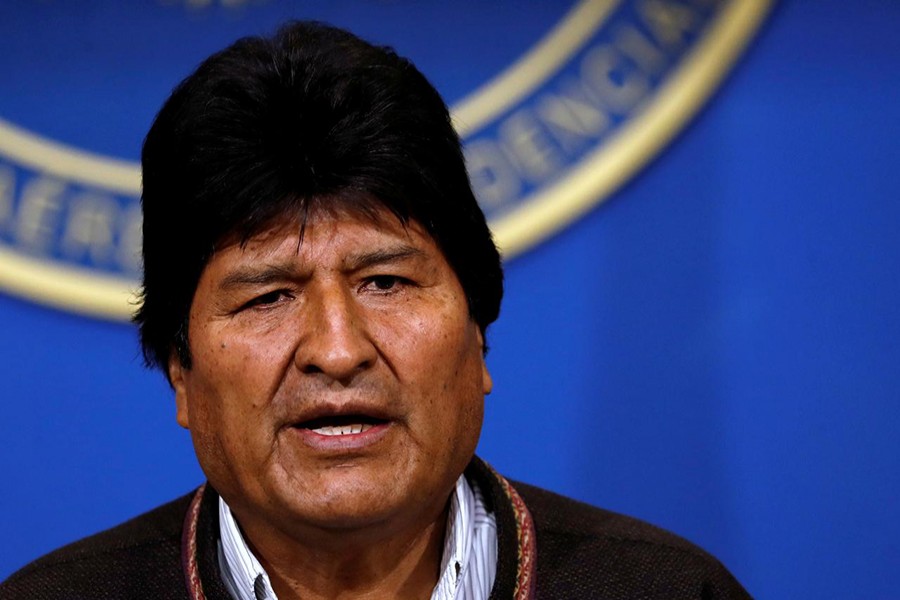 Bolivian President Evo Morales said on Sunday (local time) he was resigning to ease violence that has gripped the South American nation since a disputed election, but he stoked fears of more unrest by saying he was the victim of a “coup” and faced arrest.

Video footage showed clashes on the streets of La Paz and some buildings on fire Sunday night after the military called on Morales to step down and allies deserted him following weeks of protests since the October 20 election.

Morales, in power for nearly 14 years, said in televised comments earlier that he would submit his resignation letter to help restore stability, though he aimed barbs at what he called a “civic coup” and later said police planned to arrest him.

“I am resigning, sending my letter of resignation to the Legislative Assembly,” Morales said, adding that it was his “obligation as indigenous president and president of all Bolivians to seek peace.”

However, underscoring the ongoing tensions, Morales later said on Twitter that the police had an “illegal” warrant for his arrest and that “violent groups” had attacked his home.

The commander of Bolivia’s police force said in a television interview that there was no warrant for Morales’ arrest.

The departure of Morales, a leftist icon and the last survivor of Latin America’s “pink tide” of two decades ago, is likely to send shockwaves across the region at a time when left-leaning leaders have returned to power in Mexico and Argentina.

Some of Morales’ leftist allies in Latin America decried the turn of events as a “coup,” including Venezuelan President Nicolas Maduro and Argentine President-elect Alberto Fernandez.

Mexican Foreign Minister Marcelo Ebrard said his country would offer Morales asylum if he sought it.

Nicaragua’s government also came to Morales’ defense, issuing a statement that decried the situation as a coup and a display of “fascist practices.”

Bolivia under Morales had one of the region’s strongest economic growth rates and its poverty rate was cut in half, though his determination to cling to power and seek a fourth term alienated many allies, even among indigenous communities.

Pressure had been ramping up on Morales since he was declared the winner of the Oct. 20 election.

General Williams Kaliman, the head of Bolivia’s armed forces, on Sunday said the military had asked Morales to step down to help restore peace and stability after weeks of protests over the vote.

Kaliman added that the military was calling on the Bolivian people to refrain from violence and disorder.

Earlier on Sunday, Morales had agreed to hold new elections after a report from the Organization of American States (OAS), which conducted an audit of the Oct. 20 vote, revealed serious irregularities.

The OAS report said that election should be annulled after it had found “clear manipulations” of the voting system that called into question Morales’ win, with a lead of just over 10 points over main rival Carlos Mesa.

‘Today We Won A Battle’

The resignations of Morales and his vice president meant it was not initially clear who would take the helm of the country pending the results of new elections.

According to Bolivian law, in the absence of the president and vice president, the head of the Senate would normally take over provisionally. However, Senate President Adriana Salvatierra also stepped down late on Sunday.

Legislators were expected to meet to agree on an interim commission or legislator who would have temporary administrative control of the country, according to a constitutional lawyer who spoke to Reuters.

Morales, speaking at an earlier news conference, had tried to placate critics with a pledge to replace the electoral tribunal for the new vote, though his opponents - already angry that he ran in defiance of term limits - were not assuaged.

The election standoff has dented the image of Morales - who has helmed Bolivia through a period of relative stability and economic growth - and hit the landlocked nation’s economy.

His “legacy will be compromised and the region will suffer another impact with consequences well beyond Bolivia,” said Juan Cruz Diaz, managing director of risk advisory Cefeidas Group, referring to Argentina, Chile, Peru, Paraguay, and Brazil.

Luis Fernando Camacho, a civic leader from the eastern city of Santa Cruz who has become a symbol of the opposition, said the OAS report on Sunday clearly demonstrated election fraud. He had reiterated his call for Morales to resign.

“Today we won a battle,” Camacho told a crowd of cheering supporters in the capital before Morales’ resignation, though he added more time was needed to repair the constitutional order and democracy. “Only when we can be sure that democracy is solid, then will we go back home.”

US Secretary of State Mike Pompeo had also welcomed the call for a new vote to “ensure free and fair elections.”