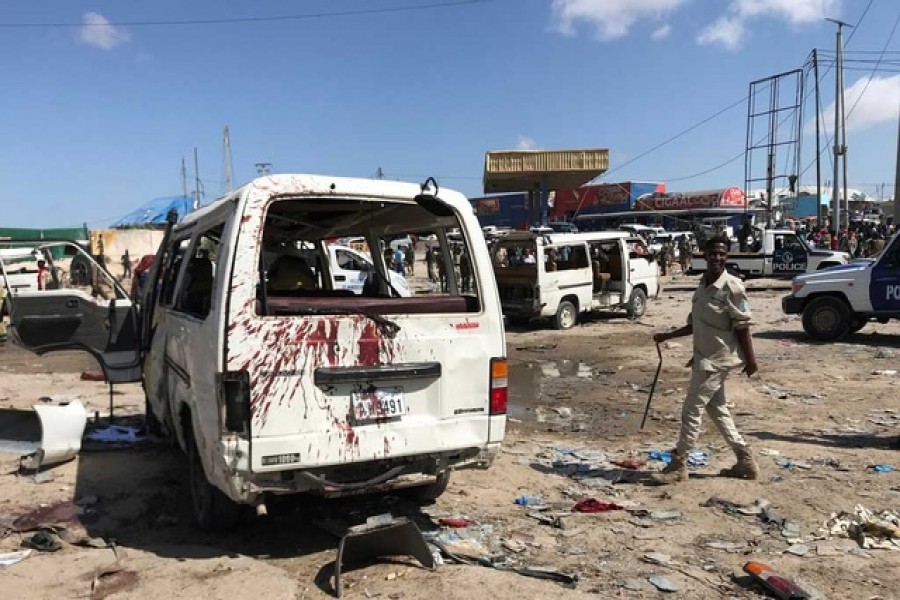 Somali security assess the scene of a car bomb explosion at a checkpoint in Mogadishu, Somalia, December 28, 2019. Reuters

An explosion at a busy checkpoint in Somalia's capital killed at least 13 people and injured dozens on Saturday, a local resident and a Reuters witness said, amid persistent insecurity in the Horn of Africa nation.

After the sound of a huge blast at the Ex-Control checkpoint in Mogadishu, 55-year-old Sabdow Ali, who lives nearby, told Reuters by phone that he had left his house and counted at least 13 people dead.

"Dozens of injured people were screaming for help, but the police immediately opened fire and I rushed back to my house," he said.

The injured were transported to Medina Hospital, where a Reuters witness saw dozens arriving by ambulance from the scene.

Speaking to reporters at the blast site, Mogadishu Mayor Omar Muhamoud said the government confirmed at least 90 civilians, mostly students, had been injured in the explosion.

No one immediately claimed responsibility for the blast, but Al Qaeda-linked Islamist group al Shabaab, which wants to topple the United Nations-backed government, regularly carries out such attacks.

The police were not reachable for comment on casualty numbers. Government authorities have told medical personnel not to disclose figures as they have done in the past, and journalists are forbidden from going to attack sites.

Somalia has been riven by conflict since 1991, when clan warlords overthrew dictator Siad Barre, then turned on each other.